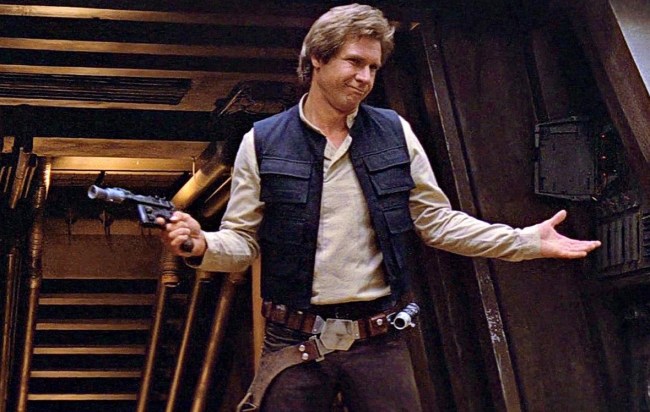 It can be argued — not proven, but argued — that Star Wars is the most influential film in the history of American cinema, despite the fact that the film hardos of the world will run around shutting down anyone who doesn’t say The Godfather or Citizen Kane or Gone With The Wind.

But when you think about Hollywood before and after the introduction of Star Wars and the way that the franchise has shaped modern filmmaking, it’s more than reasonable to place George Lucas’ visionary work among the most important in the medium’s history.

So, considering all that, one would think that being a part of such a phenomenon would be a point of pride for those involved, a source of fond memories. Nope, not for Harrison Ford. For the famously grumpy Ford, his “favorite” memory is… “the complete and utter disdain” of the film’s British crew. Shocking.

As part of the “Dogs Playing with Celebrities” series, BuzzFeed asked Ford about his favorite behind-the-scenes memory from making Star Wars.

“The complete and utter disdain that our very experienced British crew felt for what we were doing,” The Call of the Wild star responded. “They couldn’t figure it out. Guy running around in a dog suit and a princess and some guys in tight pants. They couldn’t figure out what we were doing, so they laughed at us constantly, thought we were ridiculous. And we were, but we made a movie that people really enjoyed seeing.” [via Uproxx]

Imagine looking back on the making of your legacy and having your primary takeaway being the displeasure of others. It’s so grouchy that I simply have to respect it. They say live your truth and Harrison Ford certainly does.