Harry Lennix On Why Martian Manhunter Didn’t Intervene In ‘Man of Steel’ Or ‘Batman v. Superman’ 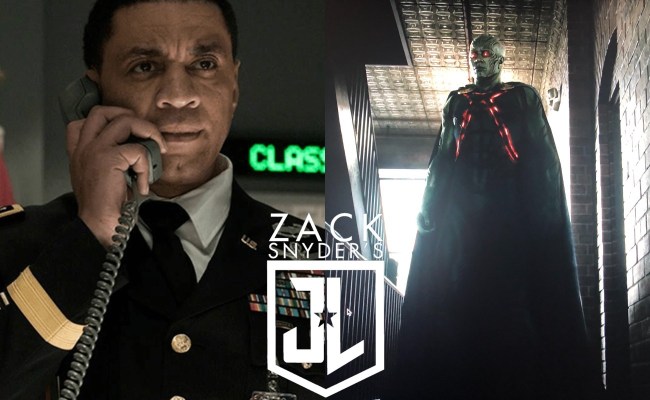 By now, especially if you’ve clicked on this article, you’ve likely seen all four hours of the epic Zack Snyder’s Justice League. But, just in case you haven’t, here’s a loud and clear SPOILER WARNING for all of you folks who haven’t seen every minute of The Snyder Cut, as we’re about to discuss the literal last scene of the film, okay? Okay.

In the epilogue, following the Justice League’s triumph over Steppenwolf and Snyder’s controversial Batman and Joker standoff in the Knightmare Reality, Bruce Wayne takes a lakeside meeting with none other than Martian Manhunter — who we previously learned was actually the General Calvin Swanwick character — who lets Bruce know that he’ll be standing with the Justice League in the upcoming battle against Darkseid, DeSaad, and the rest of their armada.

Martian Manhunter, a.k.a. J’onn J’onzz, is not only a crucial member of the Justice League, but he’s also one of their most powerful, thus begging the question of why he didn’t reveal himself to be a superpowered alien sooner? When Superman and General Zod were leveling downtown Metropolis at the end of Man of Steel *and* when Doomsday was literally murdering Superman at the end of Batman v. Superman: Dawn of Justice, Martian Manhunter willingly remained on the sidelines despite how influential his significant powers could be.

RELATED: The Most Tantalizing Aspect Of The Snyder Cut’s Knightmare Reality Is Wonder Woman’s Death

Luckily, BroBible’s Endless Hustle podcast recently sat down with Martian Manhunter actor and elite-voice-haver Harry Lennix and kindly asked him that very question for me and all of the comic book movie nerds out there, to which Lennix gave an awesomely thoughtful response.

General Swanwick has been in the DCEU since 'Man of Steel', yet he only reveals himself to be Martian Manhunter in the #SnyderCut@HarryJLennix with an awesome theological answer on why J'onn J'onzz didn't intervene sooner 👽🍿#ZackSnydersJusticeLeague

Make sure to check out Harry’s full interview with Endless Hustle when it drops, and also to subscribe to the Post-Credit Podcast, where we cover things like Zack Snyder’s Justice League, the Marvel Cinematic Universe, and all things pop culture. We’ve got Guy Pearce coming on Friday’s show, where we dove into his whole career, including working with Russell Crowe on L.A. Confidential, his career-making turn in Memento, why Ridley Scott’s Prometheus is a masterpiece, making MCU magic with RDJ, and more.

Guy Pearce getting beat up by Russell Crowe in 'L.A. Confidential', and more on Friday's @PostCredPod 🍿