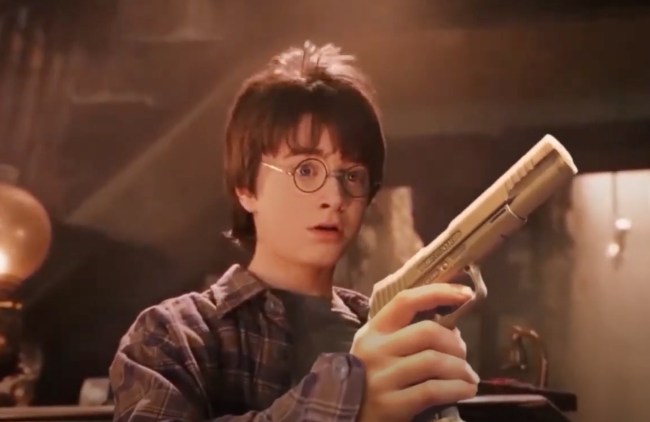 It has been almost 20 years since Harry Potter and the Sorcerer’s Stone hit theaters, the first of J.K. Rowling’s Harry Potter books to be made into a film and the first Domino to fall along the way to her becoming the first author in history to reach billionaire status. That movie hit theaters on November 16, 2001 and the rest was history, right?

Every one of the main actors from that film franchise grew up to be a household name worth anywhere from tens to hundreds of millions of dollars. And the films are such a part of our cultural fabric these days it seems like you can flip on your TV at any hour of the day and at least *ONE* of the movies will be on if not several of them across multiple channels.

This, though, has breathed new life into a 19-year-old film. The YouTube channel ‘Harry Potter With Guns’ recut the original Harry Potter and the Sorcerer’s Stone trailer to replace all of the wands with guns. And for anyone out there thinking these kids shouldn’t be handling guns, I was responsibly taught to shoot in the Boy Scouts of America around the same age Harry got his letter to Hogwarts so let’s just suspend reality for a minute and assume everything going on here is safe and legal….

I sat a tweet the other day that resonated with me and it said something to the effect of ‘why does Hollywood keep remaking great films instead of remaking bad and mediocre films that had great source material?’ I’m hoping this actually becomes a trending now that Netflix is set to remake a live-action version of Avatar: The Last Airbender after M. Night Shyamalan released one of the worst films ever produced.

The flip side of that is maybe we should just remake all of the Harry Potter films but replace magic with weapons and science. We have the technology, why shouldn’t we do this, right?