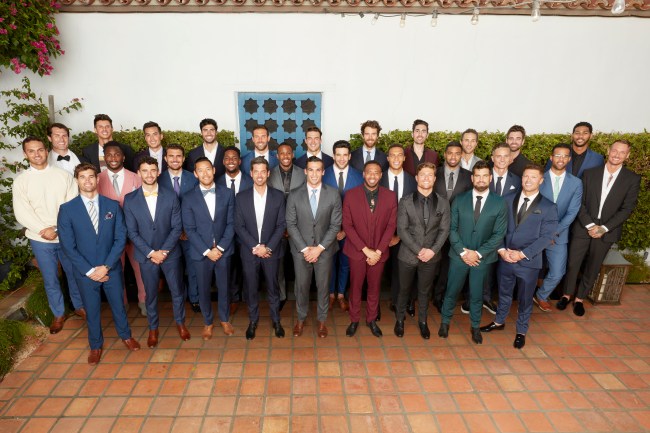 A rare sighting of the bachelor specimen emerging to collect needs and provisions after five and a half years of isolation only to discover Brinkley’s has closed.

I woke up to an avalanche of tweets about this doofus on the Bachelorette last night, Bennett Andrew Jordan. I guess he’s a Harvard grad, and everyone was cracking jokes about how he insists on letting everyone know he went to Harvard right off the bat. It’s a pretty worn out stereotype, that joke of “how do you know that a Harvard grad went to Harvard? He’ll tell you.” It’s been applied to CrossFitters and vegans, among other specialty groups. But the only thing more tired than that joke is legitimate Harvard grads who actually tell people they went to Harvard quickly. Turns out, Bennett Andrew Jordan falls into that category.

If you’re going to make a Hollywood debut during a global pandemic, you better nail the entrance. Take note. Tune in tomorrow on @abcnetwork at 8pm ET to watch the premiere of #TheBachelorette @bacheloretteabc 🌹#bacheloretteabc #BachelorNation #TheBachelor

Now, I realize the entirety of the Bachelor/Bachelorette universe is produced, heightened, manipulated… if not downright contrived. I want to give our guy the Bennettfit of the doubt and say that he’s been told to lean in to the Harvard cartoon the producers envisaged for him. I mean, nobody in their right mind would ever CHOOSE that entrance for real, right? That has to be the producers. Because I know this guy legitimately went to Harvard, and I don’t know any Harvard grads who are this… obvious? He has to be playing a character of himself because this type of person only exists in the imagination of small-brained morons when they think about Harvard graduates.

If you were to ask me to draw the first thing that comes to mind when you say “Harvard grad,” I would draw you a mousy, bony computer programmer from some far away land, wearing a dirty hoodie, HAMMERING the keyboard as he builds the next PayPal. But that guy definitely doesn’t get a rose in the Bachelorette universe.

Then I started digging. And his Instagram is, well, damning:

I really empathize with all of the young parents, who are struggling to get creative with new activities for their kids, these days. When Wilson gets tired of all the catcalls on Perry street, we always try the playground, but they have taken his rims. Luckily, Japanese whiskey, urban camping, and cards always put a smile on his face. #webeswishinsoon

Holy moly dude. That collage is from May 2020, which makes two DECADES since Tom Hanks’ Castaway was released, and about 19 years since Wilson jokes were phased out of polite society. And yet here’s Bennett, committing a day to staging a Wilson collage, wearing a leather driving glove for finger rolls? The mind reels.

For the record, Harvard’s track and field team was second only to the cross country team in terms of who gives a shit. I honestly didn’t know they made gear for that “team,” and I use that term generously. It was more of a collection of kids who wanted people to think they played a sport. Sure, if you ran track at Georgia, you were probably sniffing Olympic trials, and that’s the real deal. But throwing the discus at Harvard? You’re a walking participant trophy. Even the intramural quidditch kids had more clout.

Who knows, maybe he’s a decent fella. Even so, I can’t help but wonder how a guy like this decides to apply for the Bachelorette, gets the call, and sees it through. He’s turning himself into a joke for the rest of his life. You sell your soul, and the only way forward is to dive deeper into the realm of reality TV hell. He’ll do his appearances, his post-series recaps, his behind-the-scenes nonsense… maybe he’ll get the look for bachelor in paradise or whatever. But it’s all Bachelor stuff from here on out. I don’t see a return to credible private wealth management, in the same way that porn stars struggle to be taken seriously when they pivot to dramatic acting roles.

Oh well. Good luck to him, I guess. Seems like his old life was a better place to be but what do I know, I’m just a disgraced Harvard grad myself.