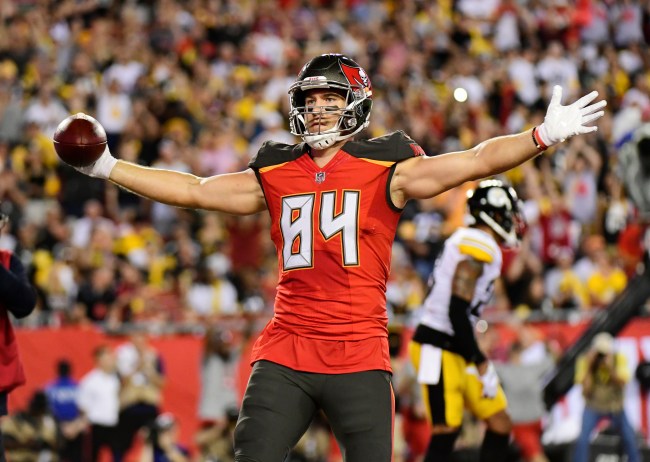 What a year for former Harvard student-athletes. Especially athletes in Tampa Bay. Last weekend, Buccaneers tight end—the literate one—Cameron Brate (Harvard ’13) caught this beauty of a TD from none other than Tom Brady himself:

Brate is now headed to the Superbowl, AND he follows me on Instagram.

Speaking of people who follow me on Instagram, how about Stanley Cup champion/Instagram influencer/heartthrob Alex Killorn (Harvard ’12)?

Prior to TB’s cup run, Killorn harnessed the power of social media for his series “Dock Talk.” He raised over $50,000 for charity and made some pretty great merch in the process, cementing himself as one of the most likable people in all of hockey.

He also made an appearance on the enormously popular comedy podcast Oops. You can check out that episode here.

When the Knicks dumped Jeremy Lin that was the last straw for me. This is the franchise that gave Jerome James $30 million. You let the most beloved Knicks figure in years who lit the Garden and City up walk over money? Come on.

Ah yes—an old faithful (but not THE old faithful. That’s coming shortly.) Jeremy Lin (Harvard ’10), aka Linsanitym, was trending today, as he often does, because former presidential candidate and current NYC mayoral candidate ANDREW YANG tweeted that the Knicks lost him when they didn’t keep Lin.

Now, Jeremy hasn’t exactly had a banner year in terms of his performance. He’s about to battle it out in the G-league with the hopes of returning to the big show. We certainly wish him well. The league is a lot more fun with JLin in it. Even so, to finally have #YangGang’s take on how the Knicks treated you back in 2012 is a testament to Linsanity’s staying power. And for that, we must include him on our list of former Harvard athletes having an impactful year.

Old faithful indeed. Ryan Fitzpatrick—a man who makes Tom Brady look young, even though he’s actually younger than Tom. Who could forget this moment in week 16, when he came in to replace Tua and somehow beat the Raiders?

Incredible. Fitzmagic has had an up and down career, but many thought Miami should have stayed with him as the starter for their entire season. It’s not hard to believe they would have made the playoffs on his shoulders. And for that, as ever, Ryan Fitzpatrick (Harvard ’05) makes the list.