Harvey Weinstein Said Jennifer Aniston ‘Should Be Killed’ Over Assault Claim, His Brother Told Him He Belongs In Hell 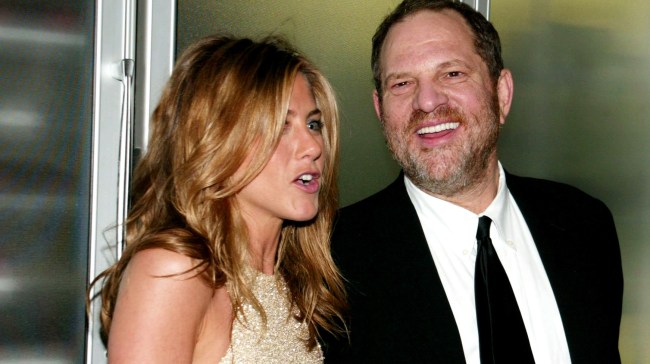 Harvey Weinsten currently faces a maximum of 29 years in prison after being convicted last month of rape and sexual assault. His lawyers are seeking the mandatory minimum of just five years because “his fall from grace has been historic” and giving the 67-year-old movie producer any more than that would be “a de facto life sentence.”

Weinstein is scheduled to be sentenced on Wednesday and in court papers obtained by The Hollywood Reporter his attorneys tried to garner sympathy by stating in a letter that Weinstein “cannot walk outside without being heckled” as if that is suitable enough punishment.

Also revealed in court papers unsealed ahead of his sentencing and obtained by Page Six, on Nov. 2, 2017, Weinstein’s younger brother Bob Weinstein wrote in an email to his sibling, “Fuck u Harvey Weinstein. I pray there is a real hell. That’s where u belong. I suppose being you, is its own hell, if u could feel it, but no chance. OJ, didn’t kill Nicole Simpson and u had consensual sex with all those poor victimized women.”

Bob also added, “U deserve a lifetime achievement award for the sheer savagery and immorality and inhumanness, for the acts u have perpetrated.”

A previous email written by Bob to Harvey read, “Sure all those 82 women had nothing better to do than have consensual sex with, u, and then out themselves and accuse u for sexual abuse.”

Prior to those emails, on Oct. 31, 2017 Weinstein’s spokeswoman Sallie Hofmeister forward him an email about the fact that the National Enquirer was going to publish a report that he sexually assaulted Jennifer Aniston.

In its email, the Enquirer said that “Jennifer confided to a friend that during the production of the 2005 movie ‘Derailed’ Weinstein sexually assaulted her by pressing up against her back in [sic] grabbing her buttocks.”

The Enquirer also said, “Through the years he would frequently stare at her cleavage/breast and move his mouth around making Jennifer uncomfortable.”

“We also quote a source close to Jennifer who tells the Enquirer: ‘Harvey was infatuated with Jennifer Aniston — He had a massive crush on her and constantly talked about how hot she was,’” the message added.

“Jen Aniston should be killed,” he wrote.

The Enquirer never did publish the allegations Aniston was claimed to have made against Weinstein.

Accusers who did come forward will be allowed to confront Weinstein in court during his sentencing hearing on Wednesday. Weinstein will also be given the chance to speak on his own behalf.