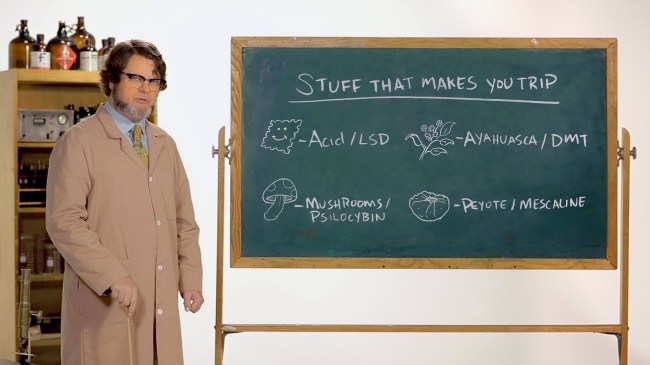 Celebrities, man… they’re just like us: they get high and do embarrassing or wild or nonsensical shit. That’s the basic premise of Have A Good Trip: Adventures In Psychedelics, at least.

Between you and me (let’s keep that a secret though bruv), I’ve dabbled in the hallucinogenic arts from time to time. One time in college, my buddies and I actually took some acid after a party, which resulted in us sitting on my back porch, watching the moon mutate as we listened to M83’s Hurry Up, We’re Dreaming album until sunrise. My poor best friend — who is I still live with this to this day, in fact — accidentally got a little too high and had a semi-panic attack as he “watched his tattoo slide off of his shoulder.” This happened back in 2014 and he hasn’t tripped since.

A couple of years later, the squad and I rented a house in the Poconos outside of this massive paintball facility. After a day of crushing Bud Heavys and ripping each other in the nuts with frozen paintballs, we went back to the crib and each downed about an eighth of shrooms each (toss them shits on pizza — delicious!). We then watched that Ryan Reynolds-starring animated flick Turbo, and fellas, let me tell ya: I’ve never been more invested in a movie in my entire life. Edge of my seat, living and dying with every moment. I could have been watching Gone with the Wind or The Shawshank Redemption for all I knew. I still occasionally think about the unbridled joy I felt when that brave little snail crossed the finish line. I imagine the feeling is similar to welcoming your newborn son into the world.

And these are just two examples! Now, instead of some random internet writer musing about their drug-using history, picture famous comedians telling these sort of stories. That’s what Have A Good Trip is and it’s a blast.

Here’s the official synopsis for Have A Good Trip: Adventures In Psychedelics, via Netflix:

HAVE A GOOD TRIP: ADVENTURES IN PSYCHEDELICS is a documentary featuring comedic tripping stories from A-list actors, comedians, and musicians. Star-studded reenactments and trippy animations bring their surreal hallucinations to life. Mixing comedy with a thorough investigation of psychedelics, HAVE A GOOD TRIP explores the pros, cons, science, history, future, pop cultural impact, and cosmic possibilities of hallucinogens. The film tackles the big questions: Can psychedelics have a powerful role in treating depression, addiction, and helping us confront our own mortality? Are we all made of the same stuff? Is love really all we need? Can trees talk? Cast members include Adam Scott, Nick Offerman, Sarah Silverman, Ad-Rock, Rosie Perez, A$AP Rocky, Paul Scheer, Nick Kroll, and Rob Corddry to name a few. Written and directed by Donick Cary. Produced by Mike Rosenstein, Sunset Rose Pictures, and Sugarshack 2000.

Co-worker Francis and his Oops Podcast actually got to talk to comedian Rob Huebel this week’s episode about Have A Good Trip, his experience with psychedelics, and his sneaky successful and hilarious career thus far.

Have A Good Trip: Adventures In Psychedelics hits Netflix on Monday, May 11.