Can We Still Wear Hawaiian Shirts This Summer, Even If We Don’t Own A Rifle Or Hate Minorities? 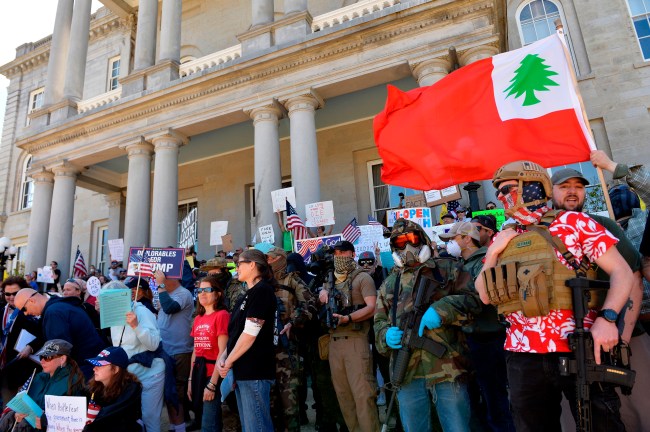 Hawaiian shirts are the best. They compliment such a wide variety of body types. Enormously obese men and chiseled hunks alike can put one on and head to work for casual Friday, knowing they’ll be fine at the ensuing happy hour and even, perhaps, the steakhouse after. Whatever the day and night hold, you’re squared away in a floral short sleeve button down that says fun? Sure. It’s dressy. It’s festive. It’s the male sundress.

There’s an armed guy claiming he’s here to support the protestors but he’s got a Hawaiian shirt under all his gear 🤔 https://t.co/ACPbNXk51X

Except a disturbing trend has been seen of late. Right wing militia types have taken to wearing Hawaiian shirts as a result of some CRAZY internet dot-connecting. It all started with a breakdancing movie from the 80s called Breakin’ 2: Electric Boogaloo. This was a sequel, and a bad one, and its goofy name lent itself to sequel shorthand nicely. From there, right wing militia groups started referring to an upcoming Civil War 2: Electric Boogaloo. Then they dropped the “electric” for convenience sake, and it was just Boogaloo. And just as young toddlers struggle with multi-syllabic words, these guys stumbled when trying to sound that out. Some said “big igloo” and others said “big luau”—and THAT is how we got to Hawaiian shirts.

I’m out of breath.

For the full history of how these zeroes selected the Hawaiian shirt as their de facto costume, read this brilliant piece by Jonathan Evans in Esquire.

Let me be clear: if you see me wearing a Hawaiian shirt this summer, it’s not because I want to signal to my pals in bulletproof vests and FOX RACING helmets that I’m ready to rumble. Rather, I like the colors and patterns of orange Toucan beaks and curled iguana tails festooning my front and back. I like reaching for a cocktail napkin at the bar, unencumbered by sleeves. Time was, I only wore long sleeve button downs and would roll the sleeve to the elbow, creating a lumpy tourniquet that cinched off the blood flow to my hands, turning my fingernails purple. And for what? To show off my forearms? I don’t even work on those.

Hawaiians solved that. SSBDs were the answer. And I’ll be damned if I’m going to let some lumpy, fupa-jiggling, rifle-packing incel choad appropriate my favorite summer shirts for his rebellion. I will continue to wear my Hawaiians and bring them inflatable nurses and paintball passes as peace offerings. Hopefully that will help them let off some steam. Because if there’s one thing I know about Hawaiian shirts, it’s that they don’t fit right if you’re stressed.