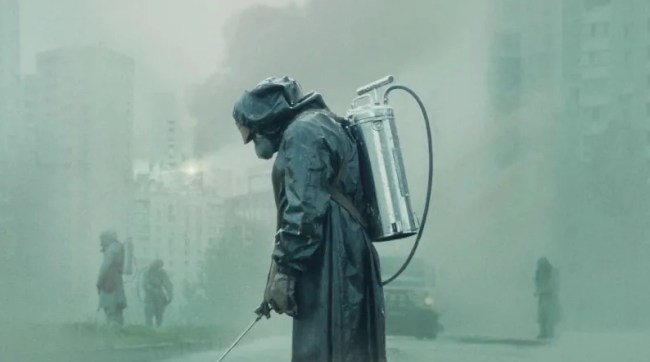 At a time when many wondered what HBO would do after Game of Thrones ended and took with them the ratings bonanza that the hit fantasy series provided to the network. HBO’s Chernobyl mini-series has stepped right in and has been beloved. Chernobyl is the top-rated TV show of all-time. But not everyone loves the series about the nuclear disaster, specifically the Russian government.

As of right now, Chernobyl is the highest-rated TV show in history, yes even higher than Game of Thrones, Band of Brothers, The Wire and Breaking Bad. Chernobyl currently has an IMDB rating of 9.6.

RELATED: Fears Mounting That A US ‘Nuclear Coffin’ Is Ready To Crack Open And Leak Radioactive Fallout Into The Pacific Ocean

The TV mini-series dramatizes the true story of the catastrophic Chernobyl nuclear disaster that happened on April 26, 1986, near the city of Pripyat in northern Ukraine, then the Soviet Union. The TV show focuses on the No. 4 nuclear reactor in the Chernobyl Nuclear Power Plant burst into flames. The show also features the innocent people who lost their lives from the radiation from the nuclear accident and the subsequent coverup of one of the world’s worst man-made catastrophes by the Soviet Union government.

The Russian government hates the series so much that they are planning on making their own TV show about the Chernobyl disaster. Staying true to their true USSR propaganda roots, the Russian version will deny that the explosion was caused by a severely flawed Soviet-era reactor design along with human error. Instead, the Russian version Chernobyl TV show will blame Americans for the catastrophe.

The Moscow Times reported that Russian politicians are not happy that the United States told the story of Chernobyl. Now the country controlled by President Vladimir Putin will make their own TV series depicting what they believe happened at Chernobyl including a conspiracy theory that the tragedy was the work of the CIA. Not great, not terrible.

The Russian version of Chernobyl will have a plot that the explosion at the nuclear facility was caused by American sabotage. Alexei Muradov, the director of the upcoming TV series, plans on blaming the United States.

“One theory holds that Americans had infiltrated the Chernobyl nuclear power plant and many historians do not deny that, on the day of the explosion, an agent of the enemy’s intelligence services was present at the station,” Muradov quoted fringe conspiracy theories. On a scale of hot takes, this comes in at 3.6 roentgen.

“In place of a moving tribute to the heroic men and women who sacrificed everything to overcome the fallout from the Chernobyl disaster, Moscow gives us a thrilling detective film based on a conspiracy theory in which a KGB officer struggles to thwart American spies — the new villains in this national tragedy,” it reads in The Moscow Times. “We’ll make our own Chernobyl TV show with blackjack and hookers,” President Putin probably.