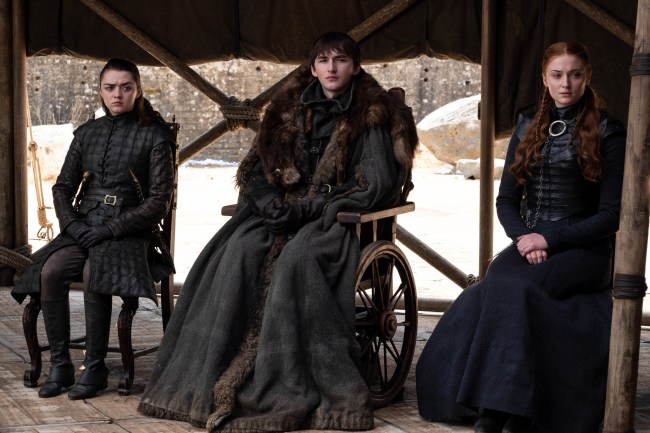 I’ll just throw this out there now, there are some possible spoilers ahead if you haven’t watched the Game of Thrones series finale yet. So if you’re not caught up on Game of Thrones S08E06 yet, you can turn away now or risk reading about a future you haven’t seen.

There has been AN INSANE AMOUNT OF FEEDBACK about HBO’s Game of Thrones series finale. A lot of it hasn’t been particularly positive because fans felt the final season was rushed and they left open a shit ton of plot holes. For instance, why in the finale did we see the blood-thirsty Dothraki armies celebrating Dany as she said they would conquer the world and then a few scenes later we see them peacefully boarding some ships to leave Westeros.

From previous seasons we know that 1) the Dothraki begin raiding surrounding areas and turn into unstoppable conquering forces after their leader is killed, 2) they (and their horses) hate riding on boats across the Narrow Sea, and 3) they should’ve been ABSOLUTELY ENRAGED that their leader was murdered. They also wouldn’t ever take orders from anyone in Westeros. So why were they straight chilling at the end? This is just an example of something the casual fans were bothered by and not something I’ve been losing sleep over at night, I swear.

One gripe I saw from fans was that they felt like the Game of Thrones series finale was just setting up future spinoffs. I think this is partly due to the fact that there’s been A LOT of news about potential spinoffs in the works.

So let’s set the record straight and say there’s currently only one spinoff that is set in stone and it’s a prequel that takes place thousands of years prior to the show that just ended. This means we might see some family names that we recognize but the characters and plotlines will be entirely new. There are two more prequels ‘in development’ at the moment but there’s a lot of uncertainty there.

In the finale, a lot of people talked about wanting to see a ‘Christopher Columbus’ style spinoff for Arya Stark after she said she wanted to sail to where the maps end. If you were hoping to see that show in the future, HBO’s programming chief Casey Bloys has some news for you:

THR: The three successor shows are all prequels. In the finale, Arya goes on to explore what’s west of Westeros. Have you considered exploring sequels? Specifically, Arya Stark as she travels west of Westeros?

Casey Bloys: Nope, nope, nope. No. Part of it is, I do want this show — this Game of Thrones, Dan and David’s show — to be its own thing. I don’t want to take characters from this world that they did beautifully and put them off into another world with someone else creating it. I want to let it be the artistic piece they’ve got. That’s one of the reasons why I’m not trying to do the same show over. George has a massive, massive world; there are so many ways in. That’s why we’re trying to do things that feel distinct — and to not try and redo the same show. That’s probably one of the reasons why, right now, a sequel or picking up any of the other characters doesn’t make sense for us. (via THR)

Nice job by @Snoodit getting HBO's Casey Bloys to shoot down an Arya spinoff/#GameofThrones sequel series. (But kind of hilarious that he kept dodging legit questions about the finale, etc. 😆) https://t.co/muZcgOPDIC

“Was there a conversation then that this might feel … a little compressed?

They made that decision a long time ago. But no, I'm not aware of any conversations that anybody thought it was crammed or anything like that.” https://t.co/k228QhTjg5

2) I like how the insert in this picture makes Casey Bloys — amusingly evasive on several points here — look like a plastic water bottle they forgot to remove in post. https://t.co/EMN6JiNSoH

He could not be any more clear here. There is no Arya Stark spinoff in the works and no plans to make that into a show down the line. But this feels like a situation similar to a potential reunion of The Office. My hunch is that no matter how hard he denies a show with this premise is ever in the works, it won’t happen. I wouldn’t be shocked to see this spinoff happen 15-20 years from now with a different actress cast as an older Arya Stark so they could bring new life to the show once people have forgotten about it.

As for the finale, I personally enjoyed it. They didn’t have much time to wrap it all up and they needed to rush through things a bit but I thought they did a decent job at tying up loose ends. Bran ascending to the throne was fine with me, the way they set it up by saying ‘who has a better story’ was bullshit because literally everyone had a better story.

If we’re being honest here, I think the primary reason I was okay with the finale is because Jon Snow reunited with Ghost beyond the wall and that’s all I really needed to see. Now give me the Nymeria spinoff. An entire show about Arya’s estranged direwolf. I’d watch the shit out of that.

For the full interview on THR you can follow that link!