I Watched ‘Heavyweights’ For The First Time In Years – Would This Movie Happen In 2020? 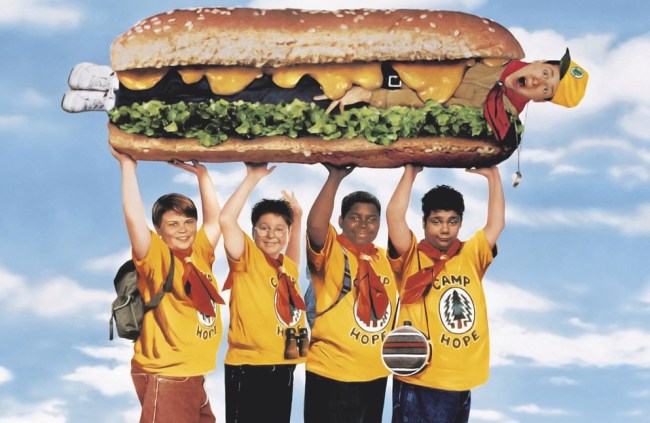 Disney Plus popped off this summer because of “Hamilton.” I’m not a personal subscriber, but my apartment has access to the streaming service since its launch. So yea, I’d say Disney Plus is worth it if you’re in the market.

My girlfriend immediately rewatched “Lizzie McGuire”, “Hannah Montana”, and all the other nonsense Disney shows of our childhood.

I, instead, rewatched (multiple times) the only movie from my childhood that means anything – the 1995 film “Heavyweights.”

“Heavyweights” is one of those perfect films from my younger years that probably would never get made today.

Tony Perkis – played by Ben Stiller – is a character who would never work in 2020, even though he’s a villain.

Imagine if “Heavyweights” were pitched today.

“OK, so Karen realizes her son is obese for his age so she sends him to fat camp and leaves him to the mercy of a lunatic fitness instructor.”

The summary from IMBD really says it all – “Plump kids are lured into joining a posh fat camp with the promise of quick weight loss and good times, only to find that the facility is a woodland hellhole run by a psycho ex-fitness instructor.”

Not fat, just plump. This is a VERY important distinction.

Talk about striking a cord. America is one of the fattest countries on the planet. How many Karens would take this as a personal attack on their Shamu of a son?

I live for that type of chaos.

Thinking about the public response makes me feel old. Don’t even think about working out. It’s the world’s fault that your kid is fat. He did his best. He’s just fat for life – everyone gets a trophy.

For those that haven’t seen the movie, Gerry Garner’s parents decide he needs to shed some lbs for the summer.

The Camp Hope spokesman promises Gerry a summer of go-carts and softball, but new ownership (Ben Stiller) turns the camp into a fitness factory with the ultimate goal of beating Camp MVP at the end of the summer relay race.

I can’t decide what’s funnier – calling the fat camp, Camp Hope or calling the camp for future Chads, Camp MVP. ‘Twas a real David vs. Goliath situation back in the summer of ’95.

Bill Burr, Tom Segura, Birbiglia…where do they draw that line? Listening to old school Bill Burr already makes me feel old…but the leaders of the industry have the obligation to push.

Feel however you want, but if these guys don’t toe the line, then jokes lose their punch. Jokes are a joke for a reason. They’re meant to be a little bit a rude, but mostly funny; however, it needs to be real enough that the joke actually stings. That’s what makes it a joke.

I’ve listened to countless podcasts over the last few years that discuss comedy’s approach to cancel culture, and it’s all about dancing the delicate balance of rude and politically correct. If the jokes don’t offend you, then what the fuck are you “joking” about?

Sorry, back to landing the plane…Tony Perkis would stir the pot, but the movie has enough lightheartedness that people can still enjoy it today. It’s more the overall idea of sending “plump” kids to fat camp that would cause a major issue in mainstream media.

Realistically, this movie can still play, as evidenced by the fact that it’s available for streaming, but producers would likely reject it during initial phases of idea pitching due to fear of public pushback.

Most producers are more than willing to assume a level of risk when making a movie that “pushing boundaries” – but Heavyweights isn’t necessarily a movie that changed the course of cinema history. Thus, the juice ain’t worth the squeeze if it was produced today.

Also, say what you want about the Tony Perkis lifestyle approach, but there are results on both ends of the spectrum.

Josh (Shaun Weiss) unfortunately had a long, public battle with drug abuse. Roy (Kenan Thompson) went on to a successful career with SNL. And Gerry (Aaron Schwartz) had some minor acting roles and had a major glow up.

In fact, Schwartz has become almost a real-life Tony Perkis, becoming a life coach for other child actors.

Turns out “canceling lunch due to lack of hustle” pays off. If only those Camp MVP assholes could see him now.

Jed Kiley is a South Boston-based writer known for elite prose and deceptive quickness. Covers sports and entertainment. Reach out via Twitter.