Heinz Is Letting You Decide If America Gets Mayochup, Hybrid Condiment Of Mayonnaise And Ketchup 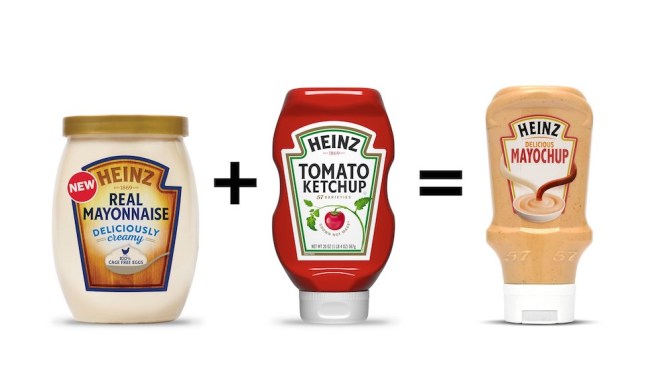 You know humanity has reached peak laziness when companies are making condiments that are a combination of mayonnaise and ketchup. Heinz has taken a page out of Cosmo Kramer’s Kramerica Industries playbook and concocted “Mayochup” and they will let you decide if the mayo/ketchup hybrid comes to America. The problem is that just like every other thing in the universe, people on the internet are divided on the controversial condiment.

People have been mixing mayonnaise and ketchup for decades. Before this bougie, highfalutin version of “Mayochup,” the mixture of ketchup and mayo were simply known as “fry sauce.” This condiment hybrid was popularized in the 1950s by a chef named Don Carlos Edwards, who served it at his Don Carlos’ Barbecue restaurant in Salt Lake City. Fry sauce is one part tomato ketchup and two parts mayonnaise. Since then, the mayonnaise and ketchup amalgamation has been a condiment staple on burgers.

Arctic Circle’s fry sauce and Hire’s fry sauce is my favorite. Heinz is about 50 years too late in getting into the fry sauce game 😂 pic.twitter.com/s3u3R2ToLG

Now, Heinz sees a possible market for mayochup because people are too lazy to make their own two-ingrediment recipe of blending ketchup and mayo. Instead of spending the 39 seconds it would take to make the condiment combination, Americans might be able to purchase this pre-made mixture. Heinz has gone full democracy and will let the people decide if America is worthy of mayochup. Now through April 15, Heinz will have a poll on Twitter to ask if mayochup should come to America. “Want #mayochup in stores? 500,000 votes for “yes” and we’ll release it to you saucy Americans,” the tweet says.

Want #mayochup in stores? 500,000 votes for “yes” and we’ll release it to you saucy Americans.

At the time of the publication, there were 471,694 votes with 55% “Pass the Heinz Mayochup” and 45% “Nah, I’ll make my own.” As of right now, mayochup appears to only be available in Kuwait.

They are late!! Been doing this for years. Now, they will get even richer. #mayochup #ketchup #mayonaise #condiments #tasty #creamy #tangy

Of course the internet had squabbles over the legitimacy of a condiment because there’s nothing that the internet won’t make their hill to die on.

back off heinz this is fry sauce territory get all the way outta here with this mayochup nonsense https://t.co/OwytbNt2Ot

This is Fry Sauce. Wtf is Mayochup