Helicopter Carrying Donor Heart Crashes, Firefighters Find Heart And Give It To A Doctor Who Immediately Fumbles The Bag 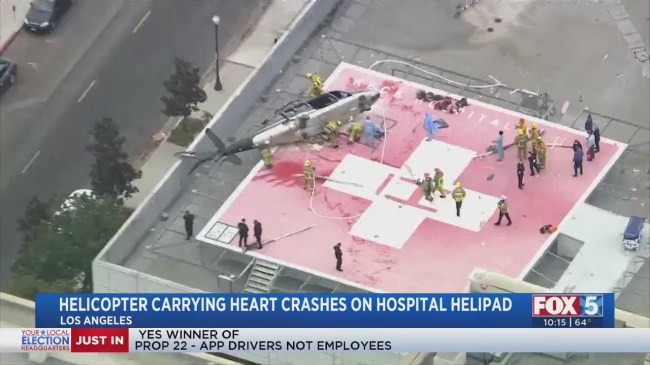 A helicopter transporting a donor heart to the Keck Hospital at the University of Southern California crashed on landing at the helipad over the weekend. The private chopper was carrying the organ for a transport patient and caused quite a bit of chaos, as you can imagine. The pilot was treated for minor injuries and the other two passengers were cleared on the scene.

The hectic afternoon did not stop there, however. Once the crash was handled and those onboard were evaluated, the focus shifted to saving the entire reason for the trip. Firefighters had to use the ‘jaws of life’ to pull out the heart and were ultimately successful. However, the firefighter handed it over to a doctor for its return to the hospital and he immediately lost his footing. His right foot catches an edge and causes him to hit the ground and fumbles the heart.

Reports have said that the heart was unharmed, and wow, that doctor got very lucky. Can you imagine if the heart survived a HELICOPTER CRASH and then didn’t make it past the slippery hands of a scrub-donned medical practitioner with no sense of ball security? Look at his form. Why is he holding it out in front of his body? Where is his instinct to protect the heart when as he’s falling? Really poor effort all around, and one would hope that he was given the rest of the day off. He doesn’t need to be anywhere near that heart for the rest of its journey.