Henry Cavill Reloading His Fists In ‘Mission Impossible: Fallout’ Is The GIF That’s Here To Blow Your Mind 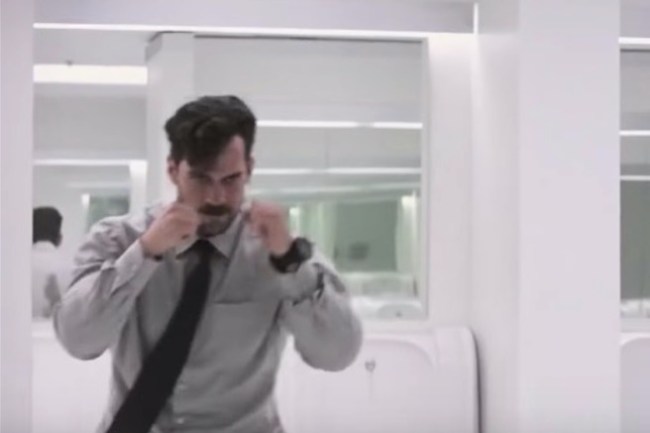 Who knew that simply reloading your fists in a fight could cause straight up magic to happen? Superman actor Henry Cavill did, obviously. That’s why he reloaded his fists during this fight scene in Mission Impossible: Fallout and somehow sprouted a new pocket on his shirt and his beard grew longer.

This scene was actually in the trailer for the film and the inconsistencies of the shot have been making the rounds for days, but the interest has exploded after Mission Impossible: Fallout hit theaters last weekend and lost viewers due to a MoviePass issue but raked in at the box office. During this scene in question, Henry Cavill’s fighting in a bathroom and ‘reloads’ his fists which causes something mysterious to happen. By reloading, his beard grows longer and his shirt magically sprouts a breast pocket:

Absolutely cannot unsee how in that shot of Henry Cavill putting up his dukes in Mission Impossible he grows a breast pocket between frames pic.twitter.com/nwTuyt386F

Someone pointed out Henry Cavill seems to grow more beard when he reloads his arms and now I can't stop watching, confused by how it seems so right pic.twitter.com/qBrNqM5ClD

Jake Hamilton was able to interview Henry Cavill and ask him about this exact moment. Henry’s explanation for growing a beard is that it’s because he ‘punch so hard’ that he ‘grew a beard in that moment’. He says he ‘made facial hair history’ with that singular fist cock:

I had the chance to ask Henry Cavill about that “arm pump / beard growth” gif that’s circling the internet.

This is the reason I went to college for journalism.

Do I have any interest whatsoever in seeing Mission Impossible: Fallout? Absolutely not. Will that stop me from using this GIF 10,000 times on Twitter (find me at @casspa) over the next few years? Absolutely not. This will be the GIF that keeps on giving.