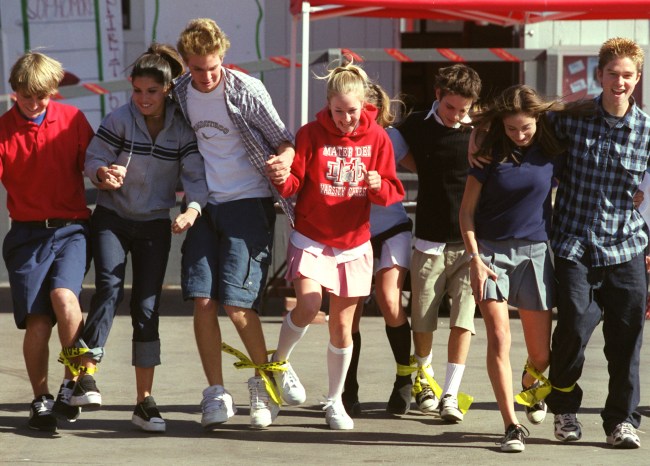 Spirit Week: when Andy Jacques broke Bryan Tupper’s arm in the arm wrestling tournament. Nothing humerus about it.

Spirit Week: when a group of junior girls—the group to which the key chick belonged, and who are now probably pricking their fingers with sewing machines as they churn out uniforms in tailoring shop at their all-ladies prison—blasted freshmen up and down the halls with super soakers filled with their own urine.

Virtual spirit day 1: Pajama Day! Milo and Izzy are ready to spend the day laying next to mom as she prepares for virtual learning! @GoshenPostES pic.twitter.com/AR6tPWKQVn

All across America, people (teachers) are celebrating “virtual spirit week” from home. It started yesterday with pajama day. From there, the themes will vary depending on each school’s take on spirit week. I think we had twin day, celebrity day, clash day, and finally class color day.

It was supposed to be fun. It was meant to galvanize class pride and school spirit. It culminated with a dance on Friday where, after a week of vengeful bitterness along class lines, we busted the barriers and grinded across grades with our pants full of bone, rubbed raw by the jean skirt pockets on the asses of our dance partners. That was nice, sure. But everything leading up to that moment was hell.

The seniors sang their own swan song, and that was fine. The week was rigged in their favor. They won every subjective competition. My sophomore year, they won Stupid Human Trick when Matt Debrauner put a condom in his nose and coughed the other end out his mouth, eyes watering as he basically flossed his septum with a prophylactic. They always won the talent show, too. Some chick came out in that crazy traditional Irish jig getup and did some riverdancing, to a standing ovation. Totally overrated.

Of course when we were seniors, we ran the field too. For my part, I won us the dance competition (you had to actually dance with your girl partner, and we just kept doing the same bullshit swingdancing moves over and over until everyone else had been tapped out.) I was also on the line for our winning effort in the tug-of-war. Amazing to see the difference in body development between 14 and 18. Those puny freshmen bitches got WORKED.

But the lasting memory of spirit week is not a positive one. I remember the feeling of the class two ahead of ours as they bullied the shit out of everyone in their path. They were bad people, plain and simple. Nothing has made me happier than watching the Facebook updates as so many of them get pregnant too young, or get neck tattoos, or “transfer” from accredited universities back to the University of Southern Maine. Nothing wrong with USM, but when you started at Pepperdine? It’s a step down, Hannah.

Not to mention she wore that stupid Pepperdine hoodie every fucking day from the moment she got her acceptance letter. Wonder if she wears a USM one now. Moron.

All of this is to say that spirit week from the comfortable confines of home seems like a major improvement. I’ll happily throw on some pajamas for the day in the name of spirit week. And by throw on, I mean keep them on, again.