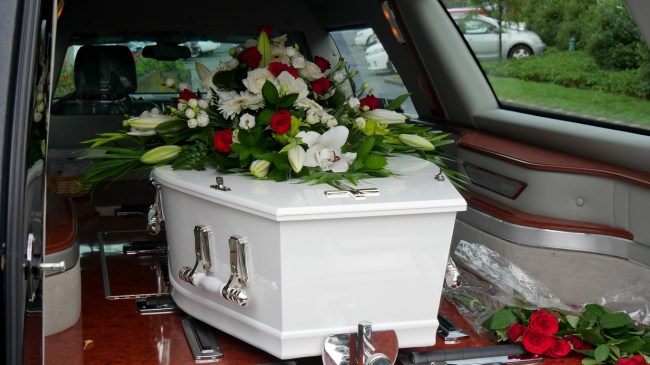 I can’t tell you why, but when I was growing up, my grandparents had an odd obsession with reading what they referred to as “the Irish sports page” in the paper— which most people know better as the obituary section.

For the most part, obituaries all follow the same formula: they tell you what a wonderful life the person had, all the beloved people they left behind, and where you can send flowers or an Edible Arrangement.

However, every once in a while, someone comes along and breaks the mold— like Rick Stein, a Delaware man who recently passed away at the age of 71.

I suggest you buckle in because you’re in for one hell of a ride:

Rick Stein, 71, of Wilmington was reported missing and presumed dead on September 27, 2018 when investigators say the single-engine plane he was piloting, The Northrop, suddenly lost communication with air traffic control and disappeared over the Atlantic Ocean off the coast of Rehoboth Beach.

As far as I know, there’s no such thing as the Delaware Triangle, so while this is a pretty tragic accident, crashing your plane isn’t exactly the craziest cause of death in the world.

Philadelphia police confirm Stein had been a patient at Thomas Jefferson University Hospital where he was being treated for a rare form of cancer. Hospital spokesman Walter Heisenberg says doctors from Stein’s surgical team went to visit him on rounds when they discovered his room was empty.

I’m not sure what mental state Stein was in but this is far from the first time an old guy has wandered out of a hospital.

With that said, I don’t think many of them do what he did after he left.

Security footage shows Stein leaving the building at approximately 3:30 Thursday afternoon, but then the video feed mysteriously cuts off. Authorities say they believe Stein took an Uber to the Philadelphia airport where they assume he somehow gained access to the aircraft.

However, we’re just getting started.

Stein’s location isn’t the only mystery. It seems no one in his life knew his exact occupation.

His daughter, Alex Walsh of Wilmington appeared shocked by the news. “My dad couldn’t even fly a plane. He owned restaurants in Boulder, Colorado and knew every answer on Jeopardy. He did the New York Times crossword in pen. I talked to him that day and he told me he was going out to get some grappa. All he ever wanted was a glass of grappa.”

Things only get weirder from there.

Stein’s brother, Jim echoed similar confusion. “Rick and I owned Stuart Kingston Galleries together. He was a jeweler and oriental rug dealer, not a pilot.” Meanwhile, Missel Leddington of Charlottesville claimed her brother was a cartoonist and freelance television critic for the New Yorker.

That seems like a bit of a pivot careerwise— but it appears it was far from the only one.

David Walsh, Stein’s son-in-law, said he was certain Stein was a political satirist for the Huffington Post while grandsons Drake and Sam said they believed Stein wrote an internet sports column for ESPN covering Duke basketball, FC Barcelona soccer, the Denver Broncos and the Tour de France. Stein’s granddaughter Evangeline claims he was a YouTube sensation who had just signed a seven-figure deal with Netflix.

Ok. I don’t know how close to Stein these family members were but you’d think they’d be able to come to some sort of consensus about what he did for a living.

People who knew Stein have reported his occupation as everything from gourmet chef and sommelier to botanist, electrician, mechanic and even spy novelist. Police say the volume of contradictory information will make it nearly impossible to pinpoint Stein’s exact location.

What the hell is happening right now? Maybe his wife might be able to clear things up— or not.

In fact, the only person who might be able to answer the question, who is the real Rick Stein is his wife and constant companion for the past 14 years, Susan Stein. Detectives say they were unable to interview Mrs. Stein, however neighbors say they witnessed her leaving the home the couple shared wearing dark sunglasses and a fedora, loading multiple suitcases into her car.

FAA records show she purchased a pair of one-way tickets to Rome which was Mr. Stein’s favorite city. An anonymous source with the airline reports the name used to book the other ticket was Juan Morefore DeRoad, which, according to the FBI, was an alias Stein used for many years.

I figured things couldn’t take any more of a twist but I turned out to be very, very wrong.

That is one story.

Another story is that Rick never left the hospital and died peacefully with his wife and his daughter holding tightly to his hands.