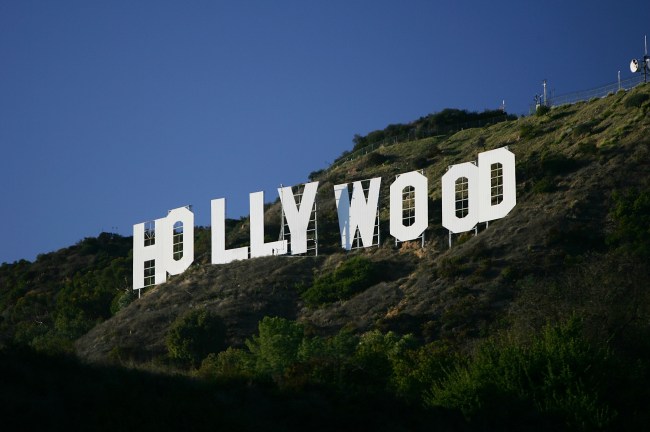 The iconic Hollywood sign overlooking Los Angeles was erected in 1923 as an advertisement for a suburban housing development called “Hollywoodland.” But this week, the 45-foot-tall by 350-foot-long sign busted out with a very mammary update. For a few hours, the prominent sign read: “HOLLYBOOB.” Commence giggling like a 6th grader.

Captain Steve Lurie, Commanding Officer of the LAPD Hollywood Area, said: “A few hours ago, a group attempted to vandalize the Hollywood sign. Los Angeles landmarks are precious to those of us @LAPDHollywood and this was way uncool (not to mention the terrain is quite steep & dangerous). Hollywood patrol officers have arrested all six individuals.”

The Hollywood sign trust wrote on Twitter, “Earlier today, the Sign’s security and video monitoring system recorded a vandalism attempt. There are those who think modifying the Sign is fun, but this renowned icon should be appreciated not demeaned.”

While the sign alteration sounds very juvenile (not that there’s anything wrong with that), the transformation was carried out to bring awareness to Instagram’s censorship of adult content. The modification of the Hollywood sign was performed by a group of six people, including Julia Rose. You may remember Julia Rose from being the World Series flasher from 2019.

that one time I changed the Hollywood sign to #hollyboob pic.twitter.com/IrIC6DpXHO

Jack’s in jail for “Giving the Hollywood sign a boob job” Updates as they come. – management pic.twitter.com/dOMgY4Xs5N

The group, including Rose and YouTuber Jack Tenney were arrested, and charged with misdemeanor trespassing. The vandals are due in court on June 3.

Rose, who is the founder and CEO of adult magazine Shagmag, said the publicity stunt was to bring attention to Instagram’s alleged censorship. Rose had her verified personal Instagram page with five million followers and the Shagmag account suspended for nudity.

“My product is nearly identical to that of Playboy’s, and my content may even be considered safer than what Playboy’s has been allowed to publish on your platform,” Rose told Vice in a message for Adam Mosseri, head of Instagram. “I want to know how they are picking and choosing which accounts to disable and why.”

“They have been extremely unresponsive,” the popular influencer and Instagram model said. “Ironically the only real response I have gotten is an employee at Facebook telling me to label my next account as a male and it will decrease my chances of getting taken down again.”

“I think this affects ALL creators,” Rose explained. “The more we allow these platforms to censor us, the more they will continue to do so. There needs to be more communication between the platforms and the creators. I believe women should be able to express themselves in a safe and justified way without being censored and shut down because of their body.”

In 2017, the Hollywood sign was changed to “HOLLYWeeD,” a prank possibly executed by Jackass star Steve-O. The same prank was carried out in 1976.