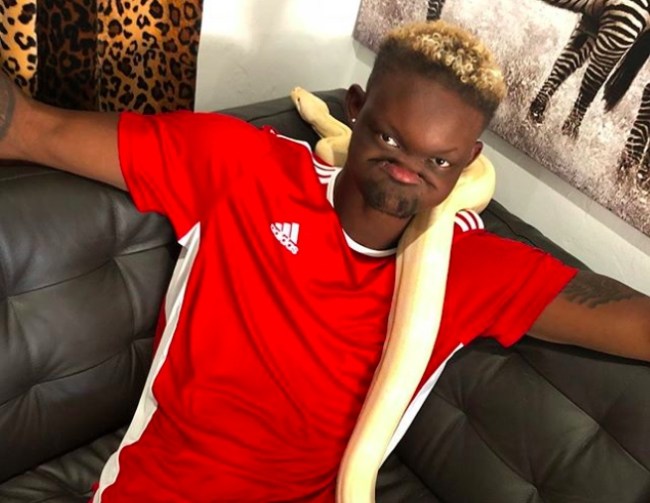 Adolescence is a weird time in a young man’s life when insecurities run rampant and insults can feel like a Mike Tyson fist to the face. I can’t imagine how big of a struggle it is to make it through this confusing period in a rough community with a physical disorder. But Instagram sensation HolyGod does.

The 17-year-old has amassed 2 million followers by using his charismatic personality and physical condition to his advantage. He was born with ectodermal dysplasia, a group of disorders in which two or more of the ectodermally derived structures — the skin, sweat glands, hair, nails, teeth and mucous membranes — develop abnormally.

HolyGod was relentlessly bullied in one of New Orleans’ roughest areas and admits to always being viewed as “different.” Instead of letting his other-ness control him, the dude turned himself into one of the most entertaining personalities on social media.

We spoke with HolyGod about how he turned all the negative energy directed at him for years into a full blown business. Pretty inspiring stuff.

Can you provide a little background on life before you were famous?

I was born January 9th 2001 (17years old) & grew up in New Orleans, Louisiana. Very rough area called “the 12 Ward” located in Uptown New Orleans. Uptown was known to be very dangerous and have a high murder rate. At the age of 10 years old my family and I relocated to the outskirts of New Orleans (Slidell, Louisiana) to escape violence after witnessing a murder outside my home in New Orleans. Growing up with my condition “ectodermal dysplasia” I was viewed as different than the rest of the kids since I didn’t grew teeth and didn’t sweat so that often made me stand out, which lead to me being bullied. I was harassed and called ugly all the time in public or at school until I started standing up for myself which often lead to physical fights and trouble.

When did you decide you wanted to be an entertainer? Was it something that you’d aspired to be or did the positive feedback on your content make you believe you had something worth sharing?

I never really wanted to become an entertainer but with all the attention I was receiving I decided to start making comedy videos since people made memes that went viral about me. I started in 2015 but didn’t have much success because I was only 14 and didn’t understand the business side of things. I was just about to quit and stop doing comedy until one day I meet my manager/business partner “Sam” aka @youngsamer who pushed me to keep going and within a year with his help I’ve gained almost 2 Million followers on Instagram and over 160k on Facebook.

Was it difficult to put yourself out there and being on camera seeing as there were likely a lot of people who were trying to bring you down while growing up?

No it wasn’t difficult because I knew my time would come & eventually those same people who bullied me would beg to be my friend.

What is your favorite piece of content you’ve created?

My favorite piece of content I created was my pollution videos because not only are the funny and viral but they send a good message to people watching and addressing a real life problem we must fix.

Is there any public figure you’d love to collaborate with?

I would love to collaborate with NBA YoungBoy because he is my favorite rapper and I relate so much to him. I also feel like we’re both Louisiana legends despite our trails & tribulations.

As someone whose been very successful after being bullied, what advice do you have for people who may be getting bullied and have issues with self-worth?

Being successful after being bullied my message to people is “you have to love yourself otherwise no one will love you.” No matter what you look like or what people say about you, we’re all beautiful and unique.

Well, I have a part in Master P new movie “I got the hook up 2” that will be out in May 2019. Hopefully I’ll star in my own movie one day and become a multimillionaire. I also have a non profit organization coming to bring awareness to my condition along with stopping bullying. Other than that I’ll just be working and making comedy videos just trying to grow my social media profiles along side with my manager.