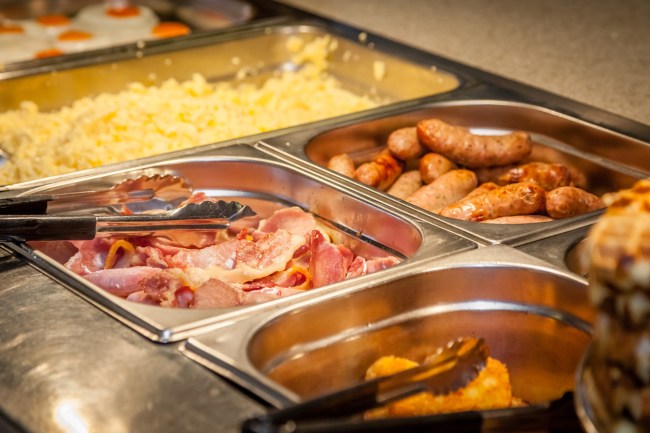 That’s it. That’s the entire take.

What I am saying is that it is weird and I’m saying it because it’s true.

The continental breakfast is a strange experience. This is something that became clear to me last weekend while I was at a hotel in Baltimore. Now, it’s not as if I just realized this. However, it had been a minute since I had the pleasure of dining at a continental breakfast, so it’s safe to say the absurdity really dawned on me when I made a visit to that one.

As far as continental breakfasts go, it was pretty standard. There was:

Before I continue, did you know that the idea of the continental breakfast originated in mid-19th century England? It’s true:

“There, the phrase ‘the continent’ refers to the countries occupying the mainland of Europe. Therefore, a ‘continental breakfast’ denotes the type of breakfast you’d be served in places like France or Italy.

Breakfasts in these countries are famously light and delicate when compared to the full English breakfast—a heaping plate of sausage, beans, toasts, eggs and more—or an American breakfast—usually some combination of sausages, bacon, pancakes, waffles, potatoes, and toast.”

Hoteliers started offering a continental breakfast to guests here in America as hotels became more popular, and after some initial resistance, the concept was generally accepted.

Fast forward a century or so and we now have the familiar line-up of cereal dispensers, bins of muffins, baskets of fruits, and (if you’re lucky) multiple waffle makers.

It’s a little strange that there are always waffle makers, isn’t it? If one of the original ideas behind the continental breakfast was a quick, light meal, there is nothing about the giant waffles those industrial-grade makers produce that meet either of those criteria. The minds behind the entire concept of the continental breakfast would be disgusted.

Yet there are always two waffle makers! Well, sometimes there’s only one, but if that’s the case, that’s on you for picking a subpar hotel. Waffle makers, like shoes and Nature Valley granola bars, should always come in pairs.

Next to the waffle makers are usually the scrambled eggs, but more often than not, they don’t look like scrambled eggs. They don’t always taste like them either. They are yellow and that’s where the similarities often end.

The eggs’ neighbors are usually sausages and bacon. It’s meat and it’s dangerous. That’s all you need to know.

The muffins next to the meat section aren’t dangerous in terms of taste or pathogens but they are still dangerous. Why? Because I always take one regardless of what else I put on my plate. It’s kind of odd because that is not the case in any other breakfast situation. If I’m at home and eating cereal, that’s breakfast.

Yet if I’m at a continental breakfast, I’ll get cereal and a muffin and I don’t know why. It’s not like they’re amazing muffins. They’re just muffins, but for some reason, I always grab one. Always.

As for cereal, there are routinely three kinds. Rarely are there more than that and I don’t have any real explanation for you as to why.

Unofficially, the most popular cereal offered at a continental breakfast is easily Raisin Bran. Cheerios would be second. Third place is too close to call but Frosted Flakes would definitely be in the running.

With that being said, continental breakfasts almost always have paper bowls for cereal and it’s terrible from both a functional and logistical standpoint; functional because you can never fit enough in there and logistical because thanks to the shallowness of the bowl, it just becomes a mess when pouring the cereal.

Then again, making a mess is just part of the experience when it comes to the continental breakfast.

For instance, I was in Nashville one weekend during a work trip. It’s a wonderful city and I’d recommend it to everyone. Ride a bull. It’s fun (if not a little rough on your hand).

The room was also very full. For someone who may or may not have been hungover, it was dicey, but I persevered and made my way to the waffle makers. There were two bowls of what I assumed was batter next to them. It had to be batter. This was breakfast. What else could it be?

So I took a scoop from one of the bowls and started pouring it onto the waffle maker and immediately heard someone say, “What are you doing?”

“No, it’s batter,” I said because I am nothing if not confident at times when I definitely shouldn’t be.

“Gravy? Why would there be gravy? This is breakfast.”

“Sir, for the biscuits.”

I’m originally from Maine and I had no idea what she was talking about. But this was the South, and as I quickly found out, biscuits and gravy is a breakfast thing down there. Gravy definitely deserved to be included in this particular continental breakfast set-up.

However, you don’t put the gravy in the waffle maker. It does not make waffles. It only makes a mess.

I also learned that when it comes to the continental breakfast, there’s little room for mistakes. This is mainly because (as was previously stated) it’s frequently in a little room.

If not in a little room, it’s in a random area adjacent to the front desk or (as was the case in a hotel I stayed in while in New York City) randomly tucked into a non-descript area behind the front desk that should really not be used for anything but is somehow okay for the continental breakfast.

There were only two tables, and yes, they were full. It got awkward and uncomfortable fast. Real fast.

As a continental breakfast veteran, here are some rules of thumb I’ve learned over the years that everyone should follow:

In regard to the “fruit with skin” thing, you should only mess with fruit that has a protective covering. This is all about keeping things sanitary. Apples? No good. Oranges? Super good. Same with bananas. Grapes are firmly off-limits.

I’m not here to pass judgment on those frequenting a continental breakfast, but at the same time, it’s early in the morning. Some people might shower before they hit up the buffet but the hands of others might not be the cleanest and you’d be wise to err on the side of caution when it comes to diving into the obligatory basket of fruit.

The other unique aspect is that there few other opportunities in life where you get to hang out with complete strangers in their pajamas.

People have bedhead. Some are wearing their slippers. Some have decided that they don’t feel comfortable being in public in their pajamas but also don’t feel the need to get fully dressed in normal clothes. As a result, they land somewhere in between by combining their pajamas with regular clothes. My mom can somehow pull that look off but I haven’t met many other people who can.

The fact that most people eating at a continental breakfast are half awake is yet another cause for the messes made at them. You can’t blame folks for not being totally in the game seeing as how all they did was roll out of bed, maybe put on clothes that aren’t pajamas, stroll down the hallway, take the elevator, and saunter on up to the complimentary spread.

Not enough effort has been exerted to merit fully waking up. It’s not an excuse for making a mess. It’s the excuse. There’s a big difference there; a difference as big as the cups for juice are small.

WHY ARE THE CUPS SO SMALL, CONTINENTAL BREAKFAST ATTENDANTS?

If they put out normal-sized cups, then I wouldn’t be forced to take two or three cups of cranberry juice. Nor would I have to make multiple trips to the juice dispenser.

The continental breakfast is just bizarre and completely unlike any other dining experience that we participate in. It has traits that seem familiar—traits like the buffet format and the food that is offered—but those traits are all slightly skewed.

What’s wild is that I feel like we’re blind to this. It’s like we’ve just accepted this whole thing without asking any questions. We’ve only known a world with the continental breakfast so we’ve naturally accepted it and all the comes with it.

I’m not sure that makes it right, though.

Should we just accept things like the endless muffins and runny eggs and small juice cups? Should we just be cool with only three kinds of cereal (one of which is always Raisin Bran) and be fine with leaving ourselves open to the kind of muted humiliation that comes with causing a minor disturbance in the presence of complete strangers as the sun has just started to come up?

Should we be okay with not being able to eat an apple because the weirdo from 205 touched every single one in the basket and, by the looks of things, definitely didn’t wash their hands before coming down?

I mean, it comes with the room. We’d be crazy to say no, right?