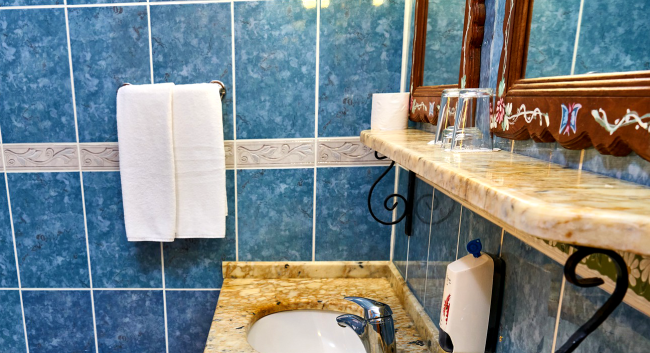 TikTok user Janessa Richard just so happens to be one of the latter – an ex-hotel employee – and she recently went viral with a video about hotels that has now been viewed over 1.2 million times.

On her TikTok account, Richard has shared a series of videos where she talks about her time working for a hotel chain and the things she learned behind the scenes.

One of those things has to do with the glasses that each hotel provides its guests in the rooms.

“So, I used to work in a hotel a few years ago and I thought it would be fun to tell you guys secrets about hotels you may not know,” she begins.

“Almost every standard room you book comes with a water bottle and drinking glasses in the room.

“I would NOT recommend you drinking in those glasses because they’re often not changed in between guests, as long as they ‘look’ clean.”

“Obviously if they’ve been used they will replace them with cleaner ones, but if they look like they haven’t been touched or drank out of they will leave it there for the next guest.”

Richard also strongly advises against laying down on top of the bedspread in your hotel room.

“Most hotels do not wash their duvets or comforters in between guests. They wash them maybe once a year which is really frigging gross,” she explains.

“So first thing you wanna do when you walk in your room… don’t go and lay down on top of the duvet – take that off because there’s so many germs and I don’t even want to know what else is on there.”

Someone who says they worked at a Hilton claims they always washed their duvets, but “other hotel brands I worked for do not.”

Another pointed out, “Look at the cleaning carts. You can see duvets/comforters are not stacked for every room.”

She also warns against walking around on the carpet in the hotel room because while they do get vacuumed regularly, they are “very rarely” shampooed and are “so f—ing gross.”

“Make sure to wear socks or slippers,” she recommends.

Now, she says that these secrets that she is sharing are based on only her personal experience and the hotel where she worked, but… I think we all know what we will be doing the next time we are forced to stay overnight somewhere away from home.

On the plus side, Richard says. at least at her hotel, if the guests were “very nice and we have rooms available we can upgrade you to a suite or better room at no cost.”

Another tip the ex-hotel employee shared was, “some hotels have a 100% satisfaction guarantee policy, which means if you find something, even one little thing that you’re not satisfied with and bring it up to the manager, they might be able to comp your room.”

Also, if breakfast is included with your room, but you don’t have time to partake, ask the staff to make you a “to go” bag with some breakfast items in it.