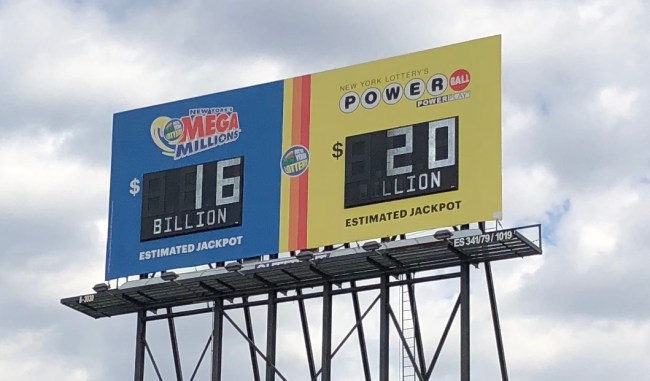 Last week, I, like so many people across the United States, decided it would be a good idea to drop money I knew I’d never see again on some Mega Millions tickets after the jackpot neared a cool $1 billion.

Some might argue wiping your ass with a $10 bill and flushing it down the toilet would be a better use of a Hamilton and, yes, they might have a point.

However, I’d argue it was worth it based on how much enjoyment I got out of fantasizing about what it would be like to be able to make my dreams come true and finally fund a music festival headlined by Sugar Ray, Smash Mouth, and Spin Doctors.

No one managed to take home the prize after the numbers were drawn on Friday night and the pot currently sits at $1.6 billion, which means you’ll probably be tempted to play once again even though the odds of winning are so astronomically low.

However, what if I told you there was a way to guarantee you have a winning ticket when the results are released tonight?

Business Insider‘s Andy Kiersz decided to take a closer look at the numbers and discovered the Mega Millions jackpot is so high that you could theoretically buy every single possible winning combination and still net $300 million in the process:

At the time of this writing, the headline Mega Millions jackpot is up to $1.6 billion, and the lump-sum cash grand prize is estimated at $904 million….

As he notes, there are at least a few issues you may run into if you use this strategy, the most notable of which is coming up with $605 million in the first place.

You’d also have to figure out a way to fill out over 302 million tickets in the course of four days, as you’d have to buy a ticket once every 0.00114 seconds in order to cover your bases.

You’ll also run into a bit of a problem if another person manages to match the winning numbers and face a game theory conundrum in the form of the chicken problem, in which you have to rely on other actors to not adopt the same strategy as yourself and ruin things for all of you.

With that said, if you do manage to pull this off, you’ll want to be sure to keep a few things in mind once you win.