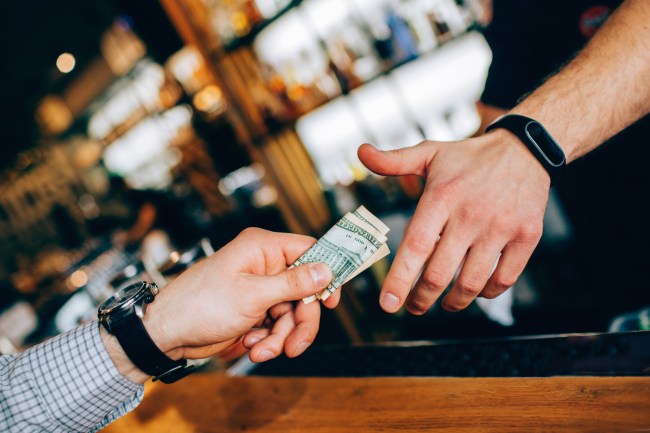 If you step up to the bar at any watering hole (respectable or otherwise) there is someone there—a beautiful woman, a grumpy old bastard, or some doe-eyed hipster in a sock hat in the middle of July—prepared to take your drink order like it was their job. Because, well, it is.

If not for our bartenders, most of us poor schlubs would never consume any alcoholic beverages beyond shots and bottles of beer. We simply do not possess the knowledge and skill of some of these mad scientists, and even if we did, we sure as shit wouldn’t waste our talents serving dicks like us every weekend.

Truth be told, it takes a special breed of human to tend bar, that’s for sure, as dealing with idiots and imbeciles is almost always par for the course. They must endure some nasty people at times to make that money. And a lot of these cats do all right, too, depending on where they are slinging drinks.

Being a bartender is just one of those occupations where a person can make a nice living without a college degree. This is because of the tips. However, any bartender will tell you that there are nights when they don’t make shit because people either have an aversion to coughing up a little extra dough or they just don’t understand the ways of leaving a gratuity in today’s society.

So, in the spirit of bettering the drunken world, here are a few pointers on properly tipping your bartender.

If it’s a busy bar that you’ve never been to before, it is sometimes necessary to make a good first impression on the bartender to ensure that a steady stream of drinks keeps coming at you throughout the night. As a result, you shouldn’t be afraid to tip big on the first round.

You want to show that cocktail-shaking fiend that making you and your crew a priority is going to pay off for them in the end. Laying down a 50-100 percent gratuity on that initial order is one way of doing this—only it must be done with some savoir-faire.  Otherwise, you’ll just come off looking like a douche bag, because even though the hope is that a large tip will afford you some preferential treatment in a packed bar, you don’t want the barkeep to know that is the intention.

Therefore, it is essential to never gloat about leaving a big tip. Don’t say something dumb like, “Hey bro, did you see that? I just left you $20 on a $5 drink. There’s more where that came from.” Hell no. Never do that. Bartenders can’t stand those types of dick moves. All you want to do is hand them some cash like that’s just the way you roll, politely thank them for their help, and go on about your night.

If you’re lucky, they may notice. But whatever you do, do not skimp on the tip during the first round. We’re not kidding; you could end up going thirsty.

Additionally, it is perfectly acceptable to base a tip on the types of beverages you order. It only stands to reason that you’ll want to leave more if a mixologist spends a lot of time creating some wild concoction.

However, in just a regular bar situation, some say leaving $1-2 for a beer or glass of wine is good, while others suggest that it is better to leave a little more (maybe $3 a drink). It really comes down to how well the bartender is doing when it comes to keeping up with your drunken mission. Are they cool or just a condescending prick? All of this matters when it comes time to leave a tip.

If you have a run-of-the-mill bartender, don’t be embarrassed to throw down 20 percent per order. This rate is a well-established standard in most places. However, please feel free to leave more for exceptional service. Let’s just say that you should step up to the bar every time prepared to leave 20 percent but just know that no one is going to chastise you for giving less if the experience is bad.

These days, it is becoming increasingly more popular to just start a tab rather than continue to pay cash for every drink. This is when you hand the bartender a card and they keep it open until you square up with them at the end of the night.

This makes tipping easier since it prevents you from constantly having to do math in your head. That shit is sometimes hard enough to do sober. Once again, tacking on 20 percent is a respectable tip to leave on a bill when paying by card. We have even been known to go 25-30 percent for those real legendary fuckers.

Also, even in a situation where you are attending an open bar—one where all the beverages are free—it is still a solid move to give the bartender a few bucks for each drink.

All in all, if you find yourself perplexed about how much of a tip to leave—the bartender was slow, they were a bit rude, maybe they didn’t get the order right that one time—stick to somewhere around 15 percent. Sure, the service might have been subpar, but there is no need to completely stiff them.

Bartending is a hard job and all of us have bad nights on occasion—especially those in the service industry. It is always better to leave a drinking establishment with some class.