Howard Stern Calls For O.J. Simpson To Be Banned From Twitter, O.J. Stabs Back With Bizarre Response 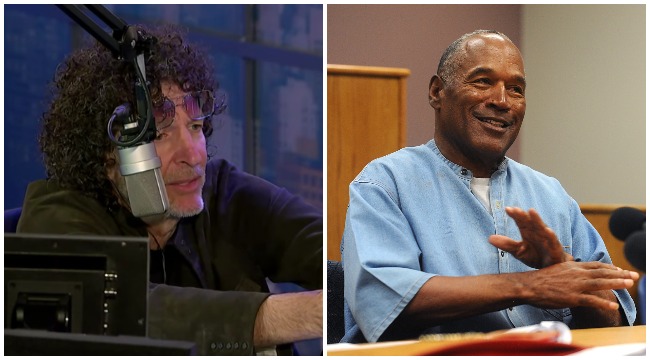 It’s gotta be a struggle to be Kim Goldman, waking up every day knowing that the man who murdered your 25-year-old brother is now galavanting on golf courses and trying to up his social clout.

Goldman, now a victim advocate and best-selling author, appeared on Howard Stern yesterday and got candid about her stance on O.J. Simpson’s social media activity 25 years after the murder of her brother, Ron.

During the discussion, Stern claimed that Simpson should be booted from Twitter “just to save you the grief of seeing him out there.”

“When someone kills your brother and they’re on the golf course and they’re sitting out there in their golf cart, living the life that most people don’t get to live, it’s got to be maddening.”

Goldman then described Simpson’s tone deaf social media feed as being “hard for the family to stomach.”

Well, in true bizarre O.J. fashion, the free man posted a rebuttal to Stern calling for Twitter to discontinue his account, and I’m not sure I follow what the fuck he’s talking about.

“Today, I was told that this individual, let’s call him Person A, stated that he thought Person B should not have a right to public expression. What’s interesting about that is Person B years ago helped fight for Person A’s right for freedom of expression, public expression.”

Another captivating part of the Goldman interview was her describing to Stern the moment the ‘not guilty’ verdict for double murder was read, recalling a repulsive gesture O.J.’s lawyer Johnnie Cochran made to her when Simpson was cleared.

I still can’t believe this dude is walking among us and my man Bredan Dassey is still locked in a cage. Justice my butt.