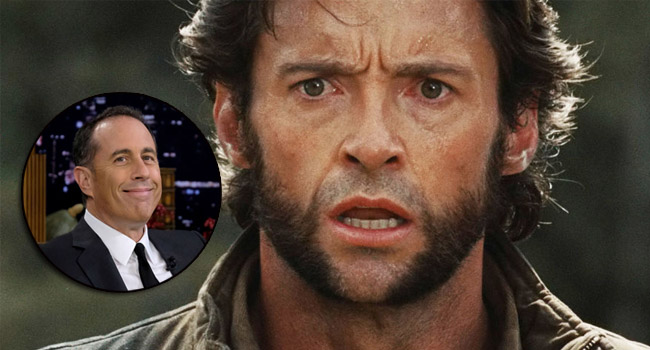 Hugh Jackman’s Wolverine has literally been the best part of the convoluted X-Men movie universe since its very first film way back in the year 2000. And Jerry Seinfeld is the reason that Jackman decided to quit. Seriously.

In a discussion with with Willem Dafoe for Variety, Jackman changed his story from what he said on The Dr. Oz Show as to why he quit playing Wolverine, “It just felt like it was the right time to do it.”

Instead, Jackman shared a story with Dafoe about how he spoke to Jerry Seinfeld about how he he decided to end his series.

“He said, ‘I’ve always believed, you should never spend everything creatively because it’s almost herculean to start up again. You should always have something in the tank,’” Jackman recalled. “Leave the party before it gets too late kind of theory.”

Yup. Thanks a lot, Seinfeld. Why couldn’t you have just brushed him off like you did with Kesha?

That doesn’t mean we’ve seen the last of Logan though, at least according to Jackman’s appearance on Lorraine Kelly’s ITV breakfast show this summer (via Digital Spy)…

Although Hugh isn’t planning on ever signing up to play Wolverine again, he admitted that Hollywood producers will be making more films and he’s more than happy to let somebody else fill his shoes.

“Definitely someone else will play the role [of Wolverine], it’s a great role,” he added.

“You know, it’s like a Bond or it’s like a Batman, those kinds of roles. Other people will play him for sure.”

Dafoe, as you may recall was ALSO in a superhero movie playing the Green Goblin way back in the 2002 film Spider-Man, also discussed with Jackman how much comic book-based movies have evolved since back when they first did them and they weren’t the huge tent-pole films they are now.

And here’s the entire 29-minute discussion if you want to see it all in one sitting, which why not? What else do you have to do today?