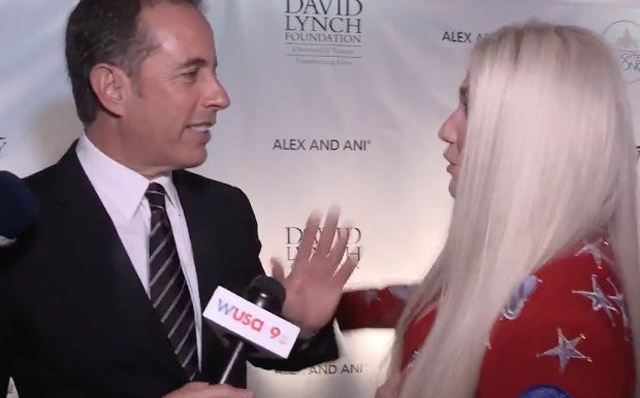 It’s now been three days since “the snub heard ’round the world” between Jerry Seinfeld and Kesha went viral. In what will go down as one of the greatest pop culture moments of 2017, Seinfeld’s epic and brutal snubbing of Kesha trying to give him a hug is just the gift that keeps on giving.

Not only was it the perfect meshing of two personalities who obviously have very little in common, it was such a Seinfeld moment that the internet even wrote a script for a show based upon it.

Here it is again in case you somehow haven’t seen it yet, or like me just want to watch a few more times…

And now, just because someone had to do it, Extra TV tracked down Jerry Seinfeld to get his side of the story in the latest version of “The Snub.”

Speaking to AJ Calloway, Seinfeld had this to say…

“I was right in the middle of an interview, it was a little off. When you get to be my age and you’ve done a couple things, you have your own reality, in my reality, I don’t hug a total stranger. I have to meet someone, say hello,” he explained. “I gotta start somewhere. Hug is not first moment of a human, two humans. I never did that.”

“I got a borderline harassment case here!” joked Seinfeld joked.

Sadly for Kesha, she never did get that hug, but Seinfeld admitted that the two of them laughed about it backstage, saying, “She was very nice about it.”

Watch Seinfeld’s entire description of his encounter with Kesha below…

Like I said before, I don’t really think either of them was in the wrong. I get why Seinfeld didn’t want to hug a stranger, and I get why Kesha wanted to hug Seinfeld. No harm, no foul here.

Twitter is, as usual, more black and white on the issue. NO GREY, DAMMIT!

Imagine if the sexes were reversed & Jerry Seinfeld had pressured Kesha for unwanted physical contact like she did to him. 🤔

Ew Jerry Seinfeld should've given Kesha a hug. Even if she wasn't Kesha he should of given her a hug. Celebrity or not.

@mikehydeck Seinfeld isn't the only one who doesn't know Kesha!!!! Enlighten please!!

That's it @JerrySeinfeld! First Kesha and now the Kardashians. I'm done with this this washed up old fuck. https://t.co/gmvs2YVDKq