Human Brain Cells In A Dish Learned How To Play The Game PONG, Did It Faster Than A.I. 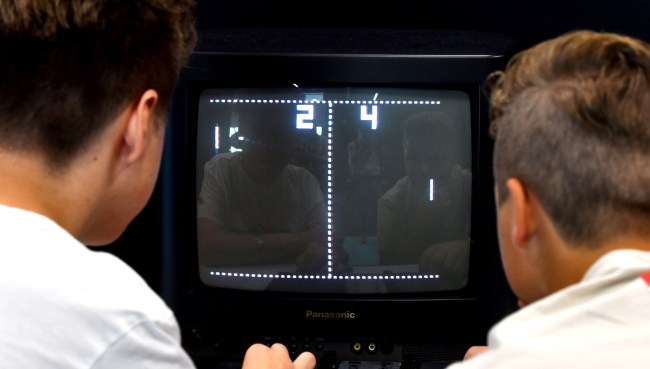 Earlier this week it was reported that a robot took just 90 minutes to learn how to play the game of ping pong in one example of just how far artificial intelligence has come.

However, another scientific breakthrough revealed this week shows that the human brain is still superior to A.I. in at least one area: playing the video game PONG. Suck it, robots.

Researchers at Cortical Labs discovered that hundreds of thousands of human brain cells in a dish can not only learn how to play PONG, they can improve their performance faster than artificial intelligence, reports New Scientist.

The “DishBrains” being created by Kagan and his colleagues each consist of between about 800,000 and 1 million living brain cells – roughly equivalent to a cockroach brain, says Kagan. Some contain mouse cells taken from embryonic brains while others contain human brain cells derived from stem cells.

The cells are grown on top of microelectrode arrays that can both stimulate the cells and read their activity. To simulate a simplified version of Pong with no opponent, the firing of electrodes on the left or right of one array tell the mini-brain – the paddle – whether the ball is to its left or right. The frequency of the signals indicates closeness.

Specific patterns of activity across the neurons are interpreted as the paddle moving left or right. The computer responds to this activity, and the feedback via the electrodes allows the mini-brains to learn how to control the paddle.

“We often refer to them as living in the Matrix,” said Kagan. “When they are in the game, they believe they are the paddle.”

While these brains in a dish aren’t better PONG players than A.I. or real people, they do learn faster than AIs.

“The amazing aspect is how quickly it learns, in 5 minutes in real time,” said Kagan. “That’s really an amazing thing that biology can do.”

Karl Friston of the University College London said about the research, “In my opinion, it is a quantum leap forward. The authors have managed to get a neural network to make sense of data from the world and act on the world at the same time.”

Kagan and his colleagues’ approach to training is based on a theory of how the brain works called the free energy principle, developed by Friston. The basic idea is that even neurons in a dish will try to create an internal model of their external world. They want to predict what will happen in terms of what inputs they will get, and they don’t like being surprised.

This is why the cells “play the game”, says Kagan. When they play, their inputs become more predictable. If they don’t play, they get random inputs that are aversive, he says.

“The remarkable thing emerging from this set-up is the sentient behavior that emerges in an unsupervised fashion,” said Friston.

Potential uses for the researchers’ discoveries are improved machine learning as well as drug testing – to see how experimental drugs affect the brain.