Robots Take Another Step Towards Autonomy, Taking Only 90 Minutes To Learn How To Play Ping Pong 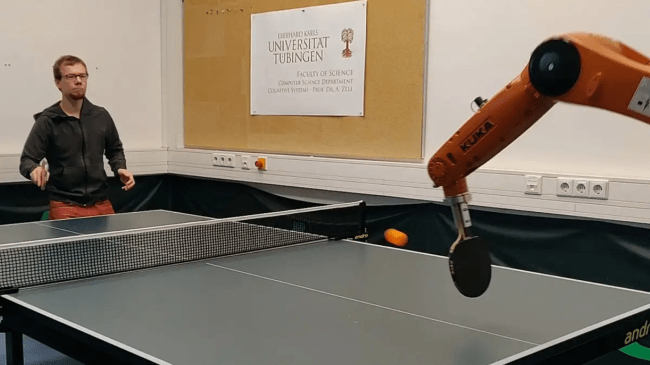 At this point in time, thanks to humans and their never-ending desire to hasten our inevitable demise, there isn’t much that robots can’t do.

Now, thanks to Yapeng Gao, Jonas Tebbe and Andreas Zell at the Eberhard Karls University of Tubingen, Germany, they can also now play table tennis.

A robot playing table tennis in itself isn’t terribly frightening. However, how it learned to play ping pong once again shows how close we are to having robots that won’t require a human presence to exist.

According to a report by New Scientist, it only took the robot 90 minutes to learn how to play the game.

It all began with a computer simulation created by the researchers.

Running this simulation allowed the robot, equipped with a machine learning algorithm, to learn how the velocity and orientation of the ping pong paddle affects the path the ball takes when it is struck.

Once this algorithm, which learns by trial and error, could reliably return the ball, the researchers set it up to control the movement of a real robot arm positioned next to a real table.

The system used two cameras to track the location of the real ball every 7 milliseconds, and the algorithm processed the signals and decided where to move the robotic arm to hit and return the ball.

The signals that the algorithm sent allowed the robot arm to accurately play shots to within an average of 24.9 centimetres of the intended location.

The entire process – including training in the virtual simulation and in the real world – took just 1.5 hours, demonstrating how rapidly algorithms can learn to perform in a new situation.

On the plus side, the robot struggled a bit when faced with extra fast, and extra slow, shots by its opponent.

Unfortunately, Dr. Jonathan Aitken, a professor of robotics at the University of Sheffield, who wasn’t involved in the study, pointed out that the robot struggled not because of the algorithm, but more because of mechanical limitations – something that can be easily fixed.

Even so, as researcher Andreas Zell stated, with a 98 percent success rate, “It’s not worse than a regular human player.”

Related: Superhuman Robots Are Coming Very Soon, Says Expert: We ‘Will Have To Be Vigilant’

Then again, as someone accurately commented on YouTube, “Everyone was like ‘ooh’ & ‘ahh’, & then the machine starting learning at a geometric rate, & then started killing everyone…”