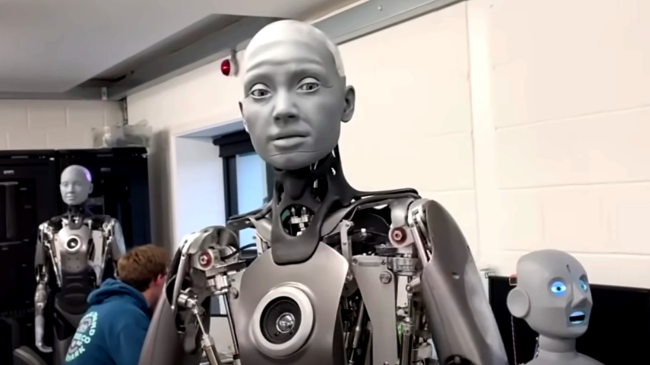 Not only are superhuman robots coming very soon, they will be coming with a smile on their faces.

At least that’s the plan, according to U.K. design and manufacturing company Engineered Arts, who recently introduced their most advanced human-shaped robot called Ameca.

Engineered Arts calls Ameca, which will be on display at CES 2022 in January, “the perfect humanoid robot platform for human-robot interaction.”

“Ameca is the perfect platform to develop interaction between us humans and any metaverse or digital realm,” according to Engineered Arts.

Interesting claim since Ameca can’t actually walk (the company says they are looking into it), but with its fully articulated head, face, neck, shoulders, arms and hands it certainly gives us a glimpse of the future of awkward encounters with a robot as it makes automatic eye contact.

“There are many hurdles to overcome before Ameca can walk. Walking is a difficult task for a robot, and although we have done research into it, we have not created a full walking humanoid. However, Ameca is a modular robot, we plan on upgrading its abilities over time so one-day Ameca will walk,” the company promises.

Ameca is currently available for purchase or event rental if you are looking to have the creepiest New Year’s Eve party ever.

Thankfully, neither Ameca nor Mesmer can do things like run marathons, do parkour or, well, shoot people, yet.

One of Engineered Arts’ other robotic creations, the RoboThespian, can, however, perform Charlie Chaplin’s speech at the end of the film The Great Dictator.

It will probably be performing that and other cinematic classics to distract us when the grinning robot death machines are approaching us silently from above.