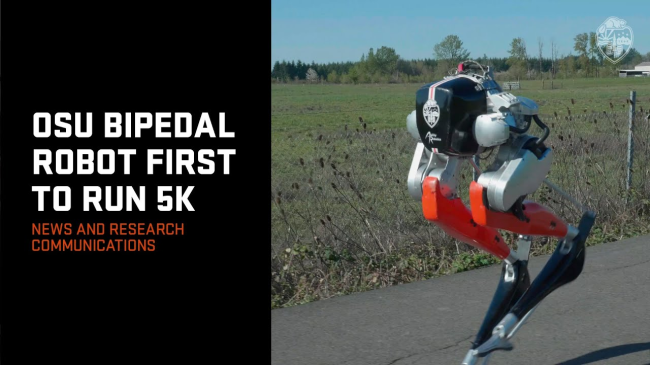 For some reason, scientists keep creating, enhancing, and teaching robots to do things that humans can do, equipping them with self-teaching artificial intelligence, and hastening our impending demise as the human race.

We’ve already had out first known case of a self-controlled hunting drone being used against people, in addition to talking humanoid robots going into mass production, and now, after teaching robots how to run, jump and do gymnastics, we’ve taught them how to do things like run a 5K.

That’s right. A bipedal robot developed at Oregon State University made history by learning to run, completing a 5K. (And even managed to not knock over all the water for other competitors because, you know, it’s a robot and doesn’t drink water.)

Cassie the robot (yes, it has a name – another mistake) completed the 5K route in a little over 53 minutes. While that’s not very speedy for a human, just give it time.

Cassie, the first bipedal robot to use machine learning to control a running gait on outdoor terrain, completed the 5K on Oregon State’s campus untethered and on a single battery charge.

Cassie, with knees that bend like an ostrich’s, taught itself to run with what’s known as a deep reinforcement learning algorithm. Running requires dynamic balancing – the ability to maintain balance while switching positions or otherwise being in motion – and Cassie has learned to make infinite subtle adjustments to stay upright while moving.

Thank goodness they’re still calling the robot an “it” and not a gendered pronoun. That day will come soon enough.

“Cassie is a very efficient robot because of how it has been designed and built, and we were really able to reach the limits of the hardware and show what it can do,” said Jeremy Dao, a Ph.D. student in the Dynamic Robotics Laboratory.

“Deep reinforcement learning is a powerful method in AI that opens up skills like running, skipping and walking up and down stairs,” added Yesh Godse, an undergraduate in the lab.

Here’s some more good news. Hurst says walking robots will one day be a common sight.

“In the not very distant future, everyone will see and interact with robots in many places in their everyday lives, robots that work alongside us and improve our quality of life,” Hurst said.

Or end it. One of those things.

Then again, maybe we’ll all just all fall in love with them, before they kill us, so we’ll die happy?