Could Getting Lobsters Super Stoned Before Cooking Make Their Deaths More Humane? A New Study Tried To Find Out 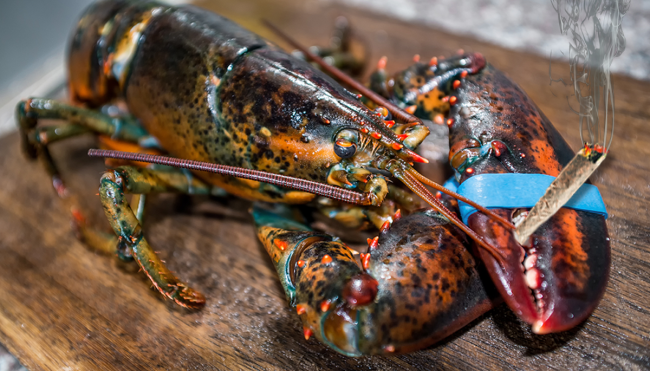 In 2003, David Foster Wallace headed up to the Maine Lobster Festival on behalf of Gourmet to spend a few days amongst the more than 80,000 people who flocked to the quaint seaside town where over 25,000 pounds of lobster were dished out over the course of the week.

The following summer, the magazine’s readers got to see the author give the annual gathering his signature treatment in the essay titled “Consider the Lobster.” The story spanned seven pages and sports 20 footnotes serving as tangents to his many vintage tangents, including those concerning the neurological inner-workings of the crustacean and the moral implications of cooking and consuming it in the primal manner most people prefer.

As a New England native, I don’t think I knew anyone who thought twice about chucking lobsters in a pot to let them boil to death prior to the publication of the piece. However, attitudes began to change in the wake of its release as more and more people were confronted with the ethical issues surrounding the practice that had gone largely overlooked.

While there are alternative methods to preparing and cooking lobster, almost all of them involve subjecting the animals to an extended period of excruciating pain during their final moments of existence. However, according to The Takeout, researchers at the University of California San Diego set out to see if they could solve this problem by thinking outside of the box for an experiment that involved putting lobsters inside one before hotboxing them.

The group behind the study was standing on the shoulders of Charlotte Gill, the owner of a restaurant in Maine who made waves a few years ago after claiming putting lobsters in a sealed container and filling it with marijuana smoke before cooking them seemed to make their passing more peaceful.

According to the preliminary results of the study, lobsters that were exposed to a steady stream of THC vapor only needed around 20 minutes to show noticeable signs of impairment as far as their motor skills were concerned. However, they needed to chill for at least an hour before there were any noticeable changes to how they reacted to being place in warm water, and the team behind the experiment say those behavioral adjustments were too minimal to suggest weed would do much to reduce suffering.

With that said, it doesn’t seem like it’s going to hurt, so at least you have an excuse to spark up whenever you’re whipping up lobster if you didn’t already.