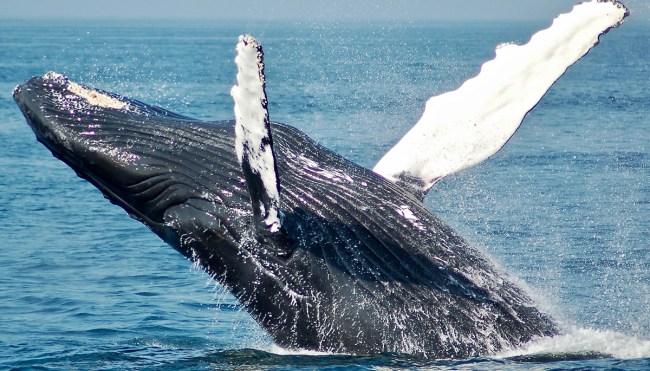 With that said, there’s plenty of evidence that suggests it’s a good idea to keep your head on a swivel when you find yourself in the vicinity of some of the most massive creatures that call the ocean home.

Plenty of people have learned that lesson the hard way, including a group of tourists who were sent flying after the boat they were on collided with one off the coast of Mexico earlier this year and a couple of kayakers who got way too up close and personal with the humpback who nearly swallowed them during a scary encounter in California.

Now, some boaters in Massachusetts can join those ranks courtesy of what went down off the coast of Plymouth over the weekend.

According to WCVB, the occupants of a small cabin cruiser were aboard one of a few vessels in the immediate vicinity of a humpback whale that was feeding in the bay on Sunday.

Unfortunately, the one that they were on ended up directly in the path of the breaching animal that crashed into the boat after leaping in the air to feed.

The people onboard emerged unscathed, but the same can’t be said for the boat, which will need a new hatch after the one above the cabin was shattered by the massive animal.

At least the owners can take some solace in knowing the damage was relatively minor compared to a similar incident that occurred in 2020 and resulted in two men being forced to abandon ship after their boat capsized following an encounter with a humpback off the coast of New Jersey.