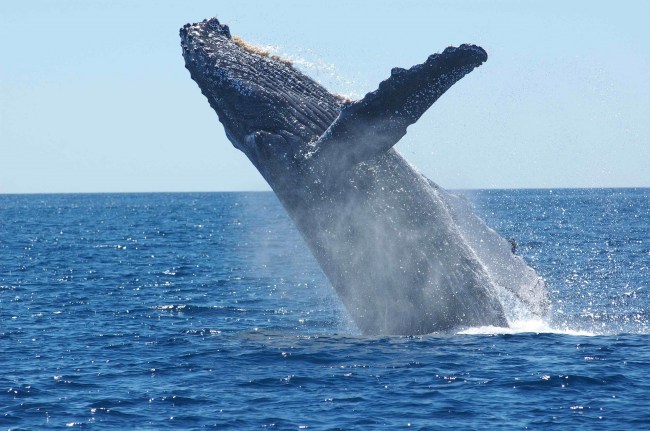 There are a lot of things you can plan for on the water but ‘breaching whale capsizing the boat’ is not one of them. You can load your boat up with lifejackets, flares, GPS, and any other safety measures you can think of but if a MASSIVE humpback whale comes flying through the air and crashes into your boat there’s really not a thing you can do to stop it from ruining your day.

Two dudes in Seaside Park, New Jersey were sent swimming and their boat was capsized after what’s suspected to be a humpback whale breached and took out their vessel. According to reports, the whale didn’t appear injured after it took out the center console fishing boat.

According to reports, DNA samples were taken to determine the type of whale but it’s believed to be a Humpback as they’ve been seen feeding in the area lately.

How’d you like to be out fishing after being stuck inside for months and one second the world is perfect, you’re chilling on a boat and enjoying life, and the next moment a humpback whale is flying through the air to take you out and you’re then swimming back to shore fully clothed and hoping there aren’t any migrating sharks below looking for an easy meal.

The details about the incident are pretty thin but here’s what was reported by CBS News:

The two people on the boat managed to swim to shore and the boat eventually washed up on the beach. There were no reports of injuries.
The whale swam away.
“The whale did what whales usually do – they’re looking for food, and they don’t pay attention,” Robert Schoelkopf, the director of the Brigantine-based Marine Mammal Stranding Center told NJ.com.
Schoelkopf told the Asbury Park Press that it likely was a humpback whale that was feeding on menhaden close to shore. His staff collected DNA samples from the bottom of the boat in hopes of identifying the type of whale. (via)

I wish I could answer the question of whether or not this dude’s boat insurance covers a whale crashing into his vessel and capsizing it before the boat later floated up onto the beach. Methinks this probably wasn’t covered by a basic insurance plan but maybe he’s got some extensive plan I’ve never heard of.

It’s been years since I’ve seen a whale in person. It’s almost always an exhilarating experience to see such a massive creature in the wild. This must’ve been thrilling for about 5 seconds before the world was flipped upside down and reality set in.