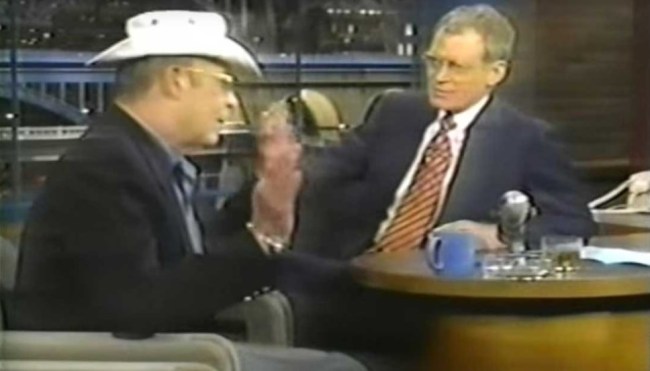 Hunter S. Thompson was a gifted writer, an astute observer of the human condition, and intriguing individual the likes we have never seen and will never see again. The Fear and Loathing in Las Vegas writer would never be put on the air on today’s sterilized and safe late-night TV shows. But it was a far different time a few decades ago when Thompson was a guest on The David Letterman Show four times between 1987 to 1997.

Thompson, the pioneer of gonzo journalism, discussed killing, politics, and drinking in his interviews with Letterman. Hunter also conversed about using his Gold American Express credit card to rent a red Chrysler convertible and drive around with drugs and naked lesbians up and down the streets in Florida. He also discussed being a Mexican bowling reporter. Letterman’s interview with Thompson back in 1987 was conducted in a Times Square hotel room because of course it was.

Thompson also appeared on Conan O’Brien’s show back in 2003. The controversial writer invited the late-night host to drink hard liquor and shoot large guns on a farm in upstate New York. Conan called Hunter “one of the strangest guests I’ve ever had on the show.” Take a trip down memory lane with Hunter S. Thompson’s unpredictable late-night TV appearances.