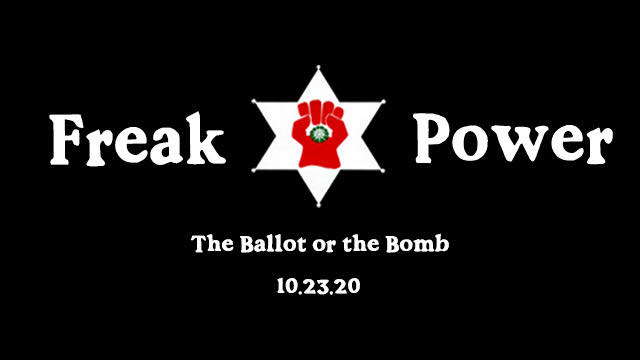 “Politics is the art of controlling your environment.” – Hunter S. Thompson

Aspen, Colorado is one of the most interesting small towns in America. While the mountain setting near Maroon Bells is nothing short of breathtaking, it can be a grotesque place if you’re not into the whole opulence and greed thing.

A cowboy mining town-turned-tony ski resort, displays of wealth in Aspen are ostentatious and obscene for a town with about 6,000 permanent residents. There are only two small grocery stores, yet art galleries and luxury retail shops like Prada, Gucci, Ralph, and Kith liter the downtown, just a stones throw from the Silver Queen Gondola up Aspen Mountain.

Billionaires, tycoons, and oligarchs fly in on private jets to rub elbows in the Rocky Mountains, causing a never-ending real estate feeding frenzy where the 1% of the world’s 1% tries to outbuild each other with multi-million dollar ranches and lodges. According to Zillow, the median home price in Aspen is a staggering $1,981,224 – a price that would barely get you a three bedroom ski condo. Celebrities like Kevin Costner, John Oates, Kurt Russel, the Kardashians, and Jack Nicholson are semi-permanent fixtures around town.

Underneath the shiny veneer of wealth and elitism, Aspen is home to an infantry of hard-working commoners, ski bums, and rugged Colorado individualists that keep the Roaring Fork Valley’s tourist-driven economy running. The kind of people who pride themselves out of necessity for keeping society running in return for a paycheck – Property managers, ranchers, chefs, bartenders, dispensary managers, fly fishing guides, ski instructors, landscapers, journalists, sanitation workers, golf course superintendents.

This paradigm has existed for generations now, going back to the 1950s when America’s titans of industry and their heirs starting flocking to the town for a quiet retreat at 8,000 feet above sea level.

See, Aspen thrived as an outpost of the counterculture in the ’60s, when the of San Francisco scene and its hippy ideals started finding new footholds across America.

After finding commercial literary success with Hells Angels, Gonzo journalist and writer Hunter S. Thompson moved from the Bay Area to Woody Creek, Colorado just down the river from Aspen, where he lived on a ranch called Owl Farm.

In 1969, Hunter Thompson became inspired by Aspen’s Mayoral race with Joe Edwards, a young lawyer in the area who defended hippies from systematic harassment from the town’s law enforcement.

Edwards lost the election against an establishment candidate. Inspired by Edwards fight and a groundswell of political activism in the 60s, Thompson himself decided to run for Sheriff of Pitkin County in 1970. In October of that year, in the midst of the campaign, he published an article in Rolling Stone called The Battle of Aspen, detailing this battle between the town’s haves vs. have nots at a national scale. Thompson used this article to put a spotlight on his campaign and platform, outlining a set of local political tentpoles dubbed “the Freak Power platform.”

“Why not challenge the establishment with a candidate they’ve never heard of? Who has never been primed or prepped or greased for public office? And whose lifestyle is already so weird that the idea of ‘conversion’ would never occur to him? In other words, why not run an honest freak and turn him loose, on their turf, to show up all the normal candidates for the worthless losers they are and always have been?”

Thompson’s greater point to a new generation of young voters (…now, The Boomers): Politics has the most punch at the local level first, national second. In his own words, politics is “the art of controlling your environment.”

"If an essentially Republican town like Aspen could elect a sheriff running on a radical Freak Power platform, then the Vote might still be a viable tool . . . and it might still be possible to alter the mean, fascist drift of this nation without burning it down in the process." Hunter S. Thompson⠀⠀⠀⠀⠀⠀⠀⠀⠀ ⠀⠀⠀⠀⠀⠀⠀⠀⠀ #freakpowerfilm

Thompson’s bid for Sheriff in rural Pitkin County received national media attention, largely for Thompson’s passion zeal for his Freak Power platform and antics. He established a headquarters at the Hotel Jerome smack in the center of Aspen. He shaved his head and pledged to rename Aspen “Fat City,” ripping up the city’s streets, banning overzealous developers, and legalizing marijuana – considered a radical platform in Nixon’s America at the time. 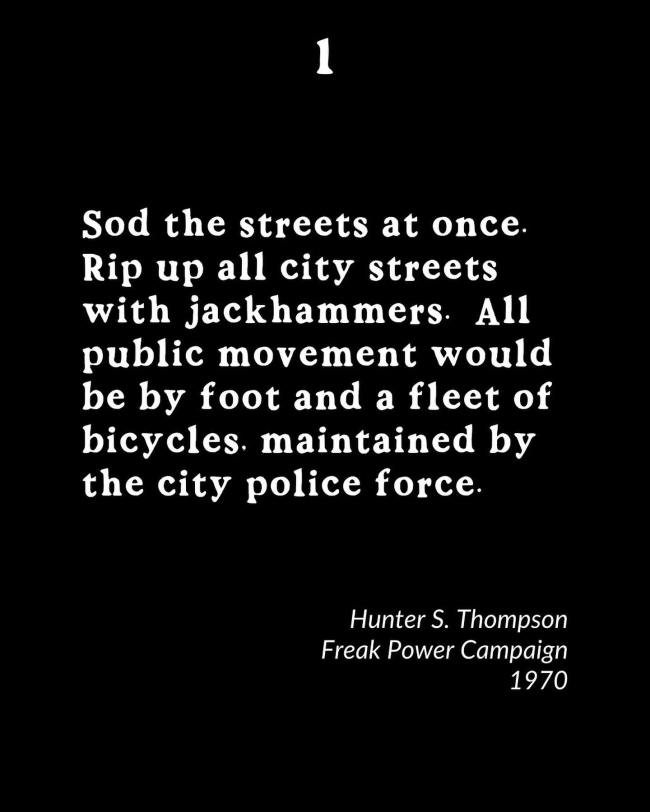 Ultimately, Thompson lost the election, 1533 to 1065 – a difference of 468 votes. He never ran for public office again, but leveraged the experience to steer headfirst into the wider American political theater. As a result, Thompson set out to famously cover George McGovern’s campaign against Richard Nixon in the 1972 election for Rolling Stone, as chronicled in Fear And Loathing On The Campaign Trail 1972.

What began as a stunt to agitate the local politicians and conservatives, quickly swelled with tremendous support from Aspen’s counterculture into a movement that had a real shot at altering the political landscape of Pitkin County. ⠀⠀⠀⠀⠀⠀⠀⠀⠀ As Freak Power gained serious momentum, Hunter recognized not only the opportunity to create change, but his responsibility to expand the scope of the sheriff’s office to have a broader and more effective impact on the community. ⠀⠀⠀⠀⠀⠀⠀⠀⠀ #FREAKPOWERFILM

Depending on who you ask, the idea of Freak Power stuck. The Freak Flag was firmly planted in the eyes of a new generation and the Freak Power ideals continue to fly, especially in the landscape of the present day – an idealogical fight that values freedom of the individual against a ruling class via systematic autocracy. The battle against having an establishment just for the establishment’s sake.

Freak Power: The Ballot Or The Bomb

Thompson’s unconventional bid for sheriff is now the subject of a brand new documentary, Freak Power: The Ballot Or The Bomb, slated to be release On Demand on October 23th. It will also be available via Amazon and Apple. Gary Clarke Jr. provides an original soundtrack, accompanying the doc.

If nothing else, it’s proof that American politics have always been a chaotic circus, down to its molecular core.

Hunter S. Thompson went to the 1968 Democratic Convention in Chicago as a journalist and returned home disgusted, yet motivated by what he’d just seen: violently suppressed protests, riots, corrupt politicians, and abusive cops. Back in Aspen, he finds more of the same. The local police and sheriff’s departments are targeting young people, harassing and charging them with absurd crimes and trying to push them out of town. Hunter decides he has to do something to change the police brutality that has become the norm.

We follow Hunter as he builds his own political movement, which grows from a local sheriff’s race to a national media sensation. He creates a radical platform in which he envisions completely reforming the sheriff’s office by disarming the police, focusing on environmental crimes and legalizing marijuana.

As Hunter and his friends grapple with the challenges of trying to transform the political landscape in Aspen, they become ensnared in the corruption and cronyism of the political establishment. During an era when the police and FBI were hunting down activists and jailing or assassinating them, Hunter’s campaign puts him in the crosshairs of J. Edgar Hoover and the forces that are under the thumb of Nixon. Soon there are death threats, bombings, an agent provocateur and Aspen becomes an ideological battleground for what “The American Dream” really means and how powerful interests often coalesce to undermine democracy.

2020 might be one long, bad acid trip, but it’s somewhat comforting to know that bad acid trips in American politics aren’t really anything new.

The reality is that it’s the norm – American politics have always been stark raving mad.

Here’s the trailer for the film: