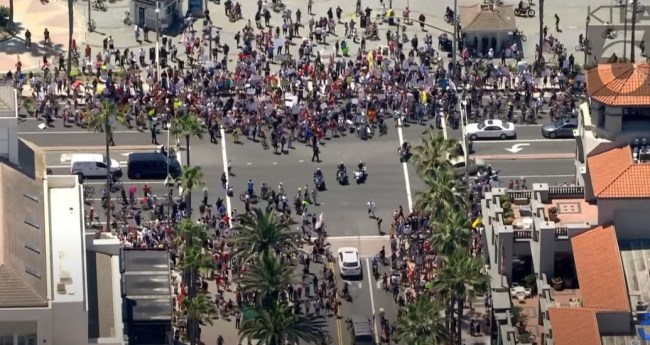 On Thursday night, California Governor Gavin Newsom ordered all Orange Country beaches to be closed after 40,000 people overcrowded Newport beach over the weekend.

BREAKING: Governor Newsom has just announced he will order ALL beaches in ONLY Orange County closed, rather than all beaches in state as memo said. He called recent crowds at OC beaches “disturbing”. There is a protest planned at Huntington Beach pier tomorrow at noon. @FOXLA

The images we saw on a few of our beaches were disturbing,” Newsom said Thursday, later mentioning Orange County specifically while praising Los Angeles and San Diego counties for keeping their coastlines clear.

“We’re gonna do a hard close in that part of the state, just in the Orange County area,” Newsom said.

According to FOX LA,a large crowd of nearly 700 protesters showed up to Huntington Beach on Friday to protest Newsom’s orders and it didn’t appear that they were practicing much social distancing.

A large crowd that failed to display social distancing gathered in Huntington Beach Friday afternoon in opposition to multiple restrictions that have been implemented by Gov. Gavin Newsom.

About 700 protesters, many of them without face coverings, milled around Huntington Beach downtown near the pier. Police on horseback kept them out of the streets.

Hundreds have gathered in Huntington Beach to protest Governor Newsom’s order to close all OC beaches. The city is planning to sue Newsom, and Newport Beach will discuss doing the same this weekend. We have SkyFox over the protest and will be keeping an eye on it. @FOXLA pic.twitter.com/w2sIEKdaCG

Police and sheriff's deputies on horseback, on foot and on motorcycles set up skirmish lines to keep protesters out of the street in front of the Huntington Beach Pier, where thousands have amassed to rally against the governor's closure of OC beaches. https://t.co/6QmVcT7BeM pic.twitter.com/8KO2DCrPTe