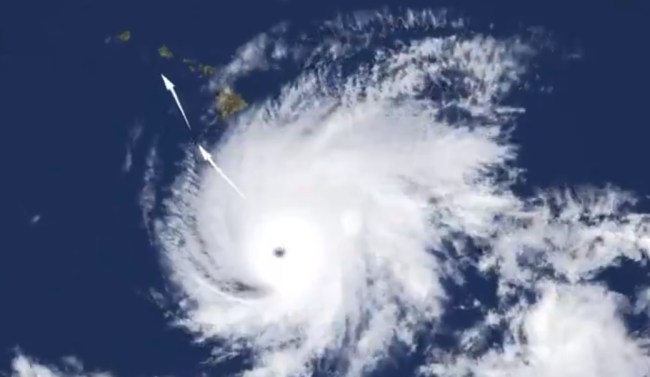 Hawaii is preparing for a very rare event in the coming days – a hurricane. The islands in the Pacific don’t experience too many named storms and has never encountered a category 4 hurricane. That could sadly change as the scary powerful Hurricane Lane barrels down on the Aloha State.

As of early Wednesday morning, Hurricane Lane was about 480 miles southeast of Honolulu and was moving northwest at about 9 mph. The massive Pacific storm was a category 5 hurricane as late as 12 pm EST before being downgraded to a category 4. Lane was packing maximum sustained winds of 160 mph. Hurricane Lane has already become one of only two recorded Category 5 hurricanes to pass within 350 miles of the Big Island’s South Point. The other being Hurricane John in 1994.

Catagory 5 #HurricaneLane is the closest a storm of this strength has been to Hawaii in recorded history. It could cause catastrophic damage with two feet of rain in some areas. A historic and potentially devastating system. @foxandfriends pic.twitter.com/Efuu6U6C26

#HurricaneLane is back to a Category 4 storm with winds now at 155 mph. The forecast path keeps the center west of the Hawaiian Islands, but they're still expecting to see flooding rains, high surf & gusty winds. @abcactionnews #HIwx #Lane #Tropics pic.twitter.com/53U9En8hfm

Hurricane Lane is supposed to become less powerful the closer it gets to Hawaii, but the storm is still considered very dangerous. Besides the severe winds, Hawaiians could be plagued with a potential 20 inches of rain, flooding, storm surge, and landslides.

Sweet limb view of Hurricane #Lane looming south of #Hawaii near sunrise this morning from the #Himawari-8 satellite – this is EUMETSAT's Natural Color RGB (note that up is roughly east here) pic.twitter.com/QMBBGxpdSJ

Tracks of the 17 named storms since 1950 within ~100 miles of #HurricaneLane's current position. 16 missed Hawaii by at least ~75 miles. The 17th storm was #Hurricane Iniki which made landfall on Kauai as a Category 4. pic.twitter.com/l8QaHGgIoJ

Hurricane watches and warnings are in effect for the Big Island, Oahu, Maui, and other smaller islands. The National Weather Service said tropical-storm-force winds could begin as early as Wednesday afternoon or evening on the Big Island.

Big impacts expected on the Hawaiian Islands over the next few days as #HurricaneLane bears down. It was upgraded to a dangerous Cat 5 hurricane this morning with wind speeds of 160mph. Looking very ominous from space…🛰 pic.twitter.com/M7sSBk8Qeu

“The center of Lane will track dangerously close to the islands Thursday through Saturday,” the National Weather Service’s Honolulu office reported. “Life-threatening impacts are likely in some areas as the hurricane makes its closest approach.”

Max sustained winds in #HurricaneLane have increased to 160 MPH, making this a very dangerous Category 5 hurricane. Storm motion has begun to take more of a northerly component as it continues to approach #Hawaii. #HIwx (@NOAA GOES-West imagery) pic.twitter.com/Prh8s3yUfu

#HurricaneLane in the early morning hours near #Hawaii. The crew of the @Space_Station sends much aloha to everyone there. pic.twitter.com/raPh37MZH9

Hurricane chasers and scientists flew into the eye of Lane when it was a category 5 storm.

Scientists from @HRD_AOML_NOAA captured the eye of cat 5 #HurricaneLane as seen from the NOAA P-3 in the Central Pacific as CPHC upgraded storm's intensity. Please monitor https://t.co/GSZibx8iEh and https://t.co/l10gLxMl3r for updates as Lane approaches the Aloha State. pic.twitter.com/nkVCOhgy5C

Scientists from @HRD_AOML_NOAA are flying through #HurricaneLane in the Central Pacific to improve hurricane forecasts. Here, Heather Holbach captured a sunrise from above the clouds in the P-3. Please monitor https://t.co/weDQ1v4ENp for updates as it approaches the Aloha State. pic.twitter.com/AED5ROlpCL

Video of #NOAA42 entering the eye #HurricaneLane during the 4PM HST mission. The storm was near its peak intensity, a Category 5, at this point. Taken by L. Bucci. pic.twitter.com/TTTzM23xwy

Just landed safely in #Hawaii. Video of the the eye of Category 5 #HurricaneLane just before sunset. It’s a strong and dangerous storm- make sure to listen to your community’s emergency managers and stay prepared and safe. pic.twitter.com/xZjK9E0min

Stores were packed with wise residents stocking up on life-saving supplies ahead of the monster hurricane.

All Costco’s on Oahu are sold out of water. This is the water section at Costco Iwilei 24 hours ago compared to now. #HurricaneLane #HIwx #Lane #Hawaii @CivilBeat pic.twitter.com/eruCRF8RnN

Hawaii Governor David Ige urged citizens to prepare and plan for the storm. Ige also allowed non-essential state employees on the Big Island and Maui to go on administrative leave from Wednesday to Friday.

#HurricaneLane 11PM update as of August 21 maintains strength of Category 5 with winds 160 mph, Gusts 195 mph, 350 mi SSE of Hawaii island. If you haven’t done so, I urge you to prepare and plan now: https://t.co/o08FNLrrOT #Lane #HiGov #HInews pic.twitter.com/raC6LSycSX

“Hurricane Lane is not a well-behaved hurricane,” Ige said in a statement. “I’ve not seen such dramatic changes in the forecast track as I’ve seen with this storm. I urge our residents and visitors to take this threat seriously and prepare for a significant impact.”

Everyone in the path of #HurricaneLane please prepare yourselves, heed the advice of State and local officials, and follow @NWSHonolulu for updates. Be safe! https://t.co/kCwtL8UxNI

Hurricane Iniki, a category 4 storm with 145 mph winds, made landfall on Kauai island in September of 1992. The hurricane killed six people and caused $1.8 billion in damage.