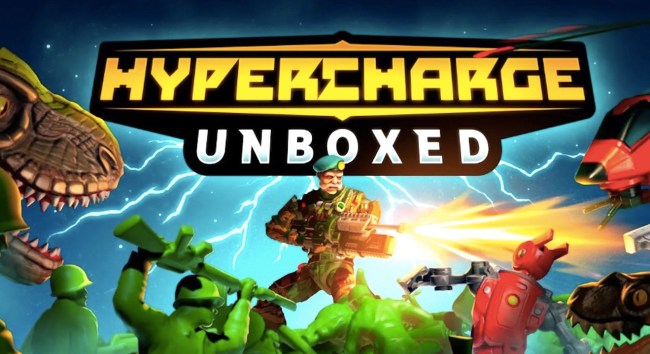 Ever since they decided to add a “no building” gameplay option, I actually started playing Fortnite again for the first time in years. It had been so long, in fact, that upon my return to the game, I was stunned by the amount of iconic pop culture characters running around.

From Batman to Darth Vader, from Naruto (not sure if that’s the name of the character but that is the name of the show… I think) to Deadpool, from Rick of Rick and Morty fame to Han Solo — Fortnite has become an IP haven in recent years, and for the first time ever, it finally occurred to me why the game is so popular: it’s sort of a cross between gaming and the metaverse/Ready Player One. “Dress up as whoever you want and explore this fictional world!” vibes.

And while Fortnite may be a glimpse into the future of entertainment, this recently viral, yet-to-be-released game Hypercharge: Unboxed seems to be a combination of both its past, via its inspiration, and future, via its customization and gameplay.

Video of Toy Story-esque video game Hypercharge: Unboxed goes viral with gameplay that looks like the stuff of childhood dreams

Over the holiday weekend, a video of Hypercharge‘s gameplay — which allows users to play as an action figure fighting in a toy store, among other locales — went viral, immediately leaving gaming fans desperate to try it for themselves.

Developed and published by indie British gaming studio Digital Cybercherries, the game was actually released on the Nintendo Switch back in 2020. While Hypercharge has yet to be released on Xbox, the studio is currently working on getting it finished and released so gamers can enjoy it for themselves.

this is our indie game, hypercharge.

do you want to become an action figure with your squad on the Xbox Series S?

hypercharge is as follows:

This is Hypercharge, an action figure styled FPS game kickstarted by just 5 guys where you battle it out in a toy store, AND I'M GIVING AWAY 5 COPIES

To enter: Like, RT, Follow me and @HyperchargeGame. And let them know why you want it, let's frikin gooooo pic.twitter.com/9yYRyMLerV

Inspired by classic toy movies such as Small Soldiers or Toy Story. Hypercharge is a solo and co-op wave-based first/third-person shooter with a small twist: you’re an action figure! Grab a friend and protect the Hypercore. Explore. Defend. Survive.

When this game does hit Xbox, I’ll be downloading it on Day One.