I Snuck On And Played Five Holes Of Golf; Sorry I’m Not Sorry 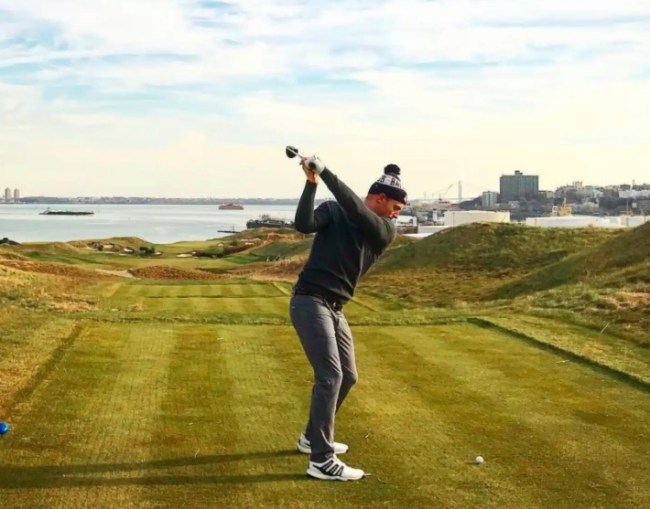 This old photo was taken at my beloved Bayonne Golf Club, which is not where I played. I’m in Maine, narc.

According to the governor of Maine, golf is not essential. I beg to differ. It’s essential for those around me that I play golf. Simply put, I am a much more genial person after a day spent throwing darts with my 6-iron. I know this and my loved ones know this, which is why I recently snuck on to a course and played five holes of golf.

For the sake of avoiding legal repercussions, I’m kidding! With that out of the way… I won’t say where and I won’t say when. But I will say I wasn’t the first. There were divots in the fairways; fresh ones, replaced haphazardly or left like an open wound to scar and bleach under a heartless sun. Clearly, I was not the first to take aim from 125 this month.

“Don’t ask for permission, ask for forgiveness.” I’ve heard this saying a lot in my life, and I don’t like it. It’s a way for assholes to justify breaking the rules before they break them. But hypocrisy is a dish best served oneself, and I definitely muttered it a few times as I took my practice swings on hole #4, which was buried deep in the woods away from roads and the clubhouse and the watchful eyes of cunty tattletales.

Being addicted to golf while also supporting social distancing and stay-at-home mandates is a conundrum. On one hand, golf seems like the sort of activity that, with proper direction, should be allowed. I know that personally, I hit the ball so much farther than everyone I play with that even in a four-ball, I wouldn’t be close to people. Sure, we might meet on the greens, but let’s offer generous gimmes for now. Anything within 20 feet is an automatic two-putt, and we’re on to the next hole.

As for players with regular strength/club speed/smash factor, couldn’t we limit groups to two, or even one, and separate tee times by 15 minutes? Depending on how elite your course is, you might not see the group ahead or behind for the entirety of your round. Tell us to leave the pins in so we don’t touch them. Keep food and beverage operations closed (bring your own Transfusion fixings if you want). Hell, wear golf gloves on each hand. There’s a way to do this.

Golf is a sport that promotes social distancing even in normal times. We give each other space to hit, standing quietly at a distance while judging the shit out of our playing partners when they skull a 9-iron over the green, into the woods, to grandmother’s house you go.

The problem is that some people (the olds) wouldn’t follow the rules because they never do. They’re lawless citizens who think the sheer number of years on their belt has earned them special privileges. 90-degree cart rules become 45-degree rules; they destroy the rim of the cup when they fish balls out of the hole with their garage sale putters; they calculate their score for the hole on the green instead of vacating to the next tee, creating logjams that ruin everyone’s day. Play through? In your bra. They won’t see you waiting because their sunglasses are darker than the blog that got me fired.

The New York Times published an article today about guerrilla golfers in Florida sneaking on to courses. When their petitions failed, these renegades took measures and Callaway Supersofts into their own hands and made hay while the sun was shining:

NY Times– “My wife’s not thrilled that I’m out here,” said Ira Lipshutz, 74, who was chipping balls with a friend at the Westchester Country Club in Boynton Beach, Fla., on Wednesday.

Nearby, Diane Koltun got out of a Lexus and headed to the greens with two golf clubs pinned under an arm.

“I think this is fine,” she said, blocking the sun with her free hand. “We’re walking around, getting some fresh air.”

That’s right, Diane. We’re just walking around, getting some fresh air, bunting 90-yard drives down the fairway because the club is too heavy for a full backswing. And get a load of Ira “my wife’s not thrilled that I’m out here” Lipshutz. Uh, maybe follow your own name and don’t tell her? Also Ira, that’s about the most common golf joke in the game. I want to roll my eyes but I’ll happily endure unlimited dad jokes in exchange for a return to our great game.

As for my round the other day, it’s hard to express how happy it made me to hit bombs again. I only brought four clubs with me—driver, 6-iron, 56 wedge, and putter—but that was plenty. The greens were pinless, so I found myself playing for the center and putting at discolored patches of grass, imagining that lovely, tinny sound of draining a putt. The better fun was found shaping drives around doglegs, trying and failing to hit stingers and baby cuts, hooting and hollering with joy like it was a waist-deep powder run with the mountain all to myself. I saw a few darkened faces peering out the windows of houses along the course, and I’m sure someone called me in. But I moved quickly, jogging off my shots and twirling clubs like Dustin Johnson on a bachelor party in Cartagena.

Five holes was enough. This is no time to get greedy. I got back to the car, threw my sticks in the trunk, and picked up a wood-fired pizza on the way home. That night, my parents and girlfriend said it was the happiest they’d seen me in a month. I doubt I’ll do it again, but here’s hoping the governors lift their golf bans soon.

This is the year.