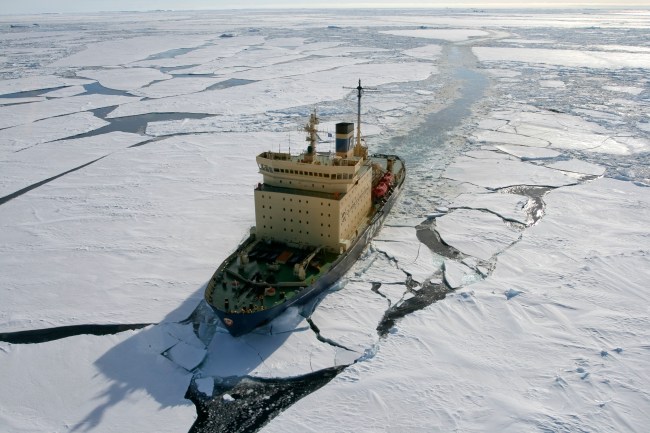 Antarctica is high on my list of places I want to visit one day. It’s the world’s southernmost continent, surrounded by the Southern Ocean, and about twice the size of Australia. 98% of it is covered in ice. According to averages, it’s the ‘coldest, driest, and windiest continent’ on the planet and it also has the highest average elevation which is pretty wild.

I’ve never traveled anywhere close to Antarctica but I have flown over Greenland on the way back to the USA from Iceland and I have to imagine the topography is pretty similar. Just miles and miles of endless ice and icy mountain peaks in the middle.

This 4K timelapse is just over 4-minutes long and it shows two months of life on an icebreaker, a ship specifically designed to crack through the ice down there so it can travel around. This truly looks like another planet. Every type of ice. Strange bacteria and phytoplankton blooms. I’m not sure I’ve ever seen anything like this video until now.

The 4K timelapse moves quickly but has narration explaining everything that’s happening. But if you’re in a situation where you can’t watch with sound right now you can speed the video up to 1.5 or 2x speed and it really looks surreal:

I cannot envision a world where I wouldn’t have felt claustrophobic during those moments when the ship was stuck in the ice for an extended period of time. The thought of an entire continent’s worth of ice slowly creeping in and locking me in place would’ve driven me mad.

Alas, the ship was always able to get out of the ice so my panic would’ve been baseless.