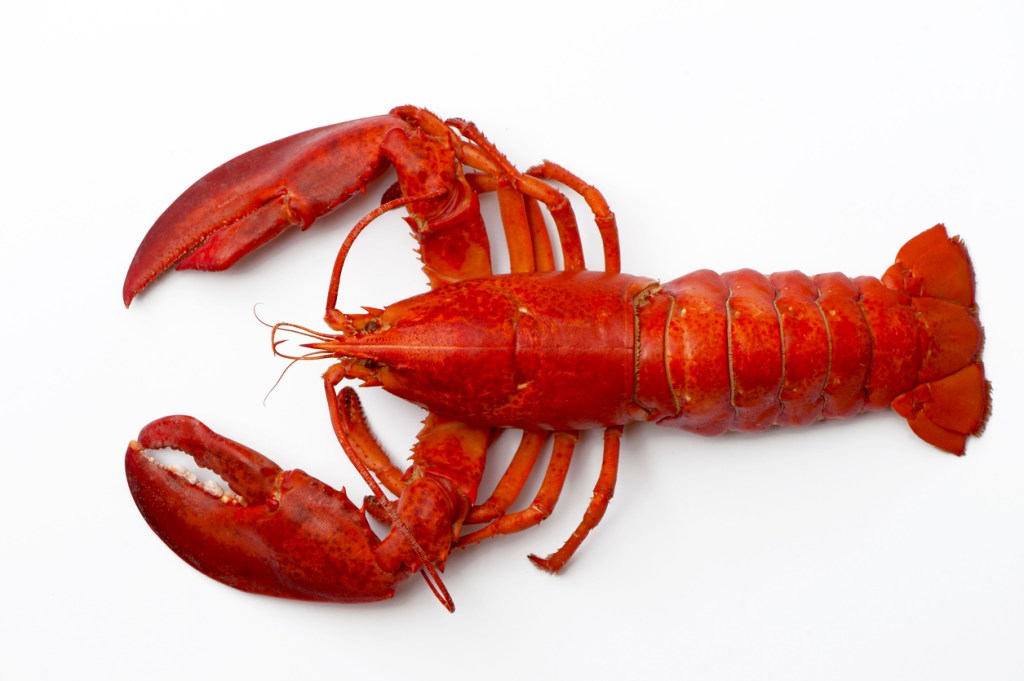 An incredibly rare lobster was found by employees at a Red Lobster. They immediately knew something was up because the bright orange lobster was the same color as a cooked lobster, not the brown-ish color of lobsters before they’re cooked.

As far as rare lobsters go, an orang lobster is amongst the rares in the world. The odds of this deformity occurring are 1-in-30 million. Then the odds of actually finding one are even rarer because when the lobster is bright orange in nature it’s like a big ol’ flashing billboard for predators saying ‘eat me’ because they’re so easy to find.

Somehow, this 1-in-30 million orange lobster made its way from the fishing boats of the Northern Atlantic all the way to a Red Lobster restaurant in Hollywood, Florida. Normally the fisherman would spot the orange lobster and release it back into the wild or save it for an aquarium, but this one slipped through the cracks somehow.

Employees then found the rare lobster, rescued it, named it Cheddar, and donated it to the Ripley’s Aquarium in Myrtle Beach, South Carolina. The story of Cheddar the Orange Lobster has since gone viral.

How rare is this lobster compared to others?

The rarest of all lobsters is the Albino/White/Ghost Lobster. This occurs roughly 1-in-100 million lobsters. That’s followed by the Cotton Candy Lobster which is also estimated at around 1-in-100 million.

Not growing up in Maine, I always got the impression that the Blue Lobster was amongst the rarest but as far as rare deformities go it’s actually the most common for rare lobsters.

The best lobster roll recipes on the planet?

I’d just like to share with you my favorite lobster roll recipe. Technically it’s two recipes, the Luke’s Lobster recipe and the Red Hook Lobster Pound recipe, but I take the two recipes and combine them into one. Aside from the steps/ingredients below, it’s of the UTMOST IMPORTANCE that you go with a top-cut hot dog bun, toast it beforehand, and use a brush to pain that bun with melted butter (lemon or garlic butter) beforehand.

Here are the two recipes for you to pick and choose what suits your tastes best, I prefer almost a complete absence of mayo in favor of lots of butter, garlic, and spices.

Step 1: Steam the 5 pounds of lobster for 10-12 minutes, then pick lobster meat (should yield 1 pound of lobster meat).
Step 2: Use top-split New England-style hot dog buns — butter sides of 4 rolls and grill until golden brown.
Step 3: Line inside of hot dog bun with some mayonnaise.
Step 4: Add 1/4 pound of prepared lobster meat, then drizzle a little melted butter on top of lobster.
Step 5: Sprinkle a pinch of celery salt, pinch of oregano, and pinch of black pepper on top of lobster.
Squeeze a little fresh lemon over the lobster roll. Serve.

Soy oil
Fresh lemon juice
Pasteurized egg yolks
Boil 3 live lobsters for 12 minutes (hardshell) or 8 minutes (softshell) in four inches of saltwater with a couple stalks of celery, 1/2 cup of white wine, about 4 sprigs of thyme, and half an onion.
Chop tail meat into 1″ chunks, remove knuckles and claws whole and refrigerate for 1 hour.

“My homemade mayo is your traditional mayonnaise made with soy oil, lemon juice and pasteurized egg yolks.

Mix the lobster meat with about a quarter cup of mayo – just enough to hold the meat together. You want to do this when the lobster is cold or the mayo will melt. Add 1/2 teaspoon white pepper, 1 teaspoon sea salt, 1/2 cup of finely chopped celery. This is your mixture.

Take a Country Kitchen Top Split hot dog bun and brush with butter, then heat on the grill.

Top with chopped scallions and a little paprika.”

It’s lobster roll season so eat it up out there!