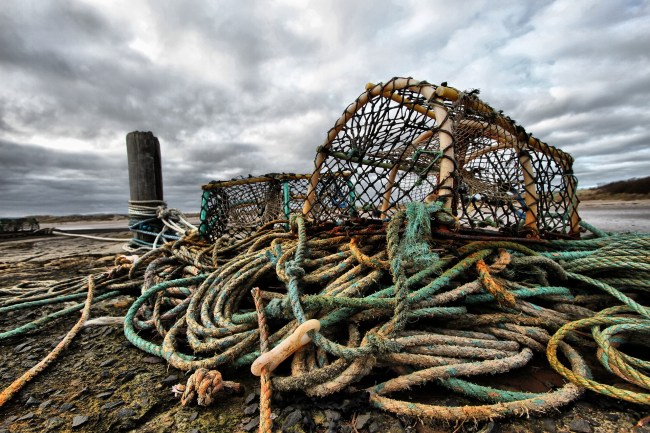 This was kind of a boring summer for ‘rare lobsters‘ in the Northeast. Over the past few years, we had reports of fishermen finding some insanely rare split-colored, ghost, and blue lobsters but I can’t recall more than 1 or 2 reports from this past Summer.

Most of the time, when one of these insanely rare lobsters are caught in the wild it’s either released back into the ocean after some photographs or the lobster is donated to a local aquarium. Now, for anyone in New England, they’ll have a chance to go see and get hands-on with a split-colored ‘Halloween Lobster’ whose markings are so clear and defined it looks like it was hand-painted by an artist.

The orange/black split-colored lobster almost looks like it was half-cooked before being taken out of the pot and released back into the wild but this is a naturally occurring phenomenon that’s crazy rare. This occurs in the wild 1-in-ever-50 MILLION lobsters.

This lobster caught by Capt. Daryl Dunham on the F/V Force of Habit was donated to the Maine Center for Coastal Fisheries where it’s currently in the touch tank for visitors to come see it and touch it Tuesday through Saturday from now through mid-October (10am-4pm).

Look at this crazy-ass lobster and tell me you wouldn’t think this was an alien (or half-cooked) if you came across this thing in the wild:

Of all the rare lobster mutations, I think this one is my favorite. The colors are so striking and it’s almost tropical. Lobsters are generally pretty ugly creatures at the bottom of the ocean (until they’re cooked) but the vibrant colors of the orange/brown split-colored lobster are great.

And while 1-in-50 million is insane, it’s got nothing on this 1-in-100 MILLION white lobster that was caught in Ireland last year. This 1-in-30 million yellow lobster caught two years ago was also pretty awesome.

I’m just now realizing that I’ve severely neglected my typical lobster intake this Summer and need to start eating at least 1 lobster roll per day from now untilthe first day of Fall to make up for the lost time.