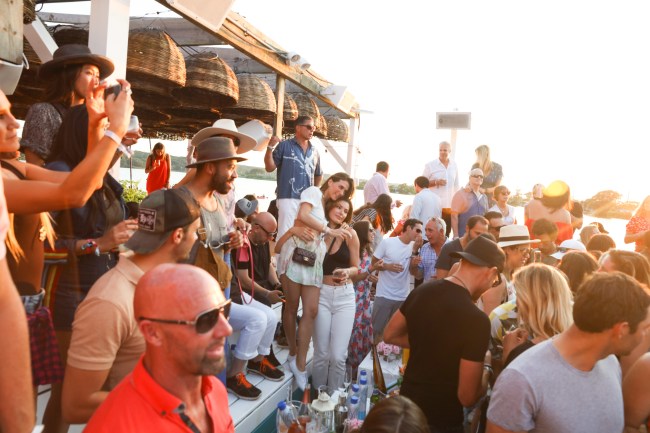 Hi there. Were you having a good day so far this Saturday? Well, this story should put a stop to that:

This summer, Ms. Berman-Schechter rented the house to a wellness professional and aspirational influencer from the New York area named Marisa Hochberg.

On June 12, Ms. Hochberg posted a picture of herself on Instagram standing underneath a Japanese dogwood tree in the Berman-Schechters’ garden. “Montauk mornings in my new summer garden,” the caption read, along with several hashtags including #goodmorning and #myownhome.

On June 15, when it came time for her to pay the $14,450 that constituted the second half of her rent, she did not pay, the Berman-Schechters said in multiple court filings.

Several days before Ms. Hochberg was scheduled to move out, according to Ms. Berman-Schechter, her father, who was listed on the lease as an occupant of the house, called and asked that his daughter be able to stay. The landlord said no. On a text message thread with both Hochbergs after the call, she offered to help find Ms. Hochberg somewhere else to live.

“You’re going to kick an almost 91-year-old man out in the middle of a global pandemic?” she texted. She added that she and her father were protected by a law passed to shield vulnerable tenants during the pandemic. Later she sent a New York Post article about moneyed tenants who had taken advantage of the law.

On Sept. 1, according to a court filing, Ms. Hochberg hadn’t paid what she owed, and hadn’t left the house. She posted a picture of herself to Instagram that day, holding the door of the Berman-Schechters’ outdoor shower open. The caption read: “I’ve heard September is the new August 🙃”

In the influencer game, we’re all faking it until we make it. Not everyone gets to be Jake Paul and start on third base because their older brother already blew the doors open. As such, some corners must be cut at times. Tagging your two-month Montauk rental with “Myownhome” is just part of the game. Sure, it made my stomach lurch, but it shouldn’t have. Because things were about to get much, much worse.

First, she doesn’t pay the rent. And this was only a few weeks after she asked if she could BUY the house. Second, she refuses to leave when her lease was up. Just… squatting, dropping trou’, and releasing a mighty influencer dump all over the face of the poor, unsuspecting home owner that rented her the house because she doesn’t drink or do drugs. And FINALLY, she leans on the frailty of her old man to win guilt points! She pulled a college student needing a paper extension routine so that she wouldn’t have to leave!!

I almost respect it. Almost.

The saving grace of this entire story is the pettiness of the home owner’s husband:

The Berman-Schechters say they made multiple attempts to settle with Ms. Hochberg, to no avail. When on Yom Kippur, the solemn Jewish holiday of repentance, Mr. Hochberg had a letter published on his synagogue’s website about the importance of charity, Mr. Schechter made an Instagram account with the handle @lyingmarissa using an image of Ms. Hochberg as the profile picture and misspelling her name. He then quoted her father’s words on one of Ms. Hochberg’s Instagram posts. (He said that he took the account down after a day because he was concerned it was “spurious.”)

If starting a spite account on Instagram isn’t exactly what Larry David would do, if he had time to learn about filters and engagement, I don’t know what is. LOVE this guy.

Don’t utilize laws that were made during the pandemic to protect at-risk or disenfranchised people from being evicted. Just to stay longer in your Hamptons rental so that your 12,000 followers were think you’re the real deal.

You’re not the real deal. You don’t even have a blue check.