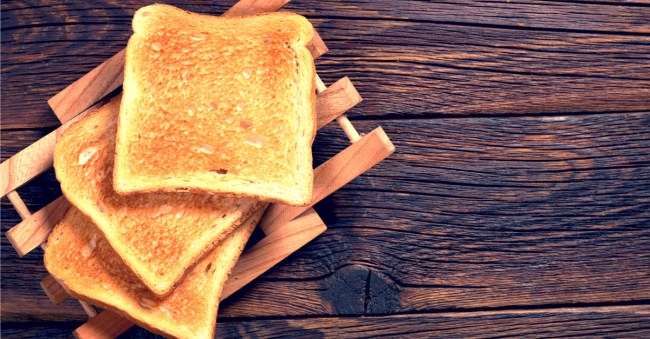 Is there a correct way to slice a piece of toast? Apparently, there is, but the internet was being torn apart this week over which way is the right way.

Personally, I didn’t even know that how you slice a piece of toast was something people could actually debate. Boy, was I ever wrong. Turns out, people have some VERY strong opinions on how you should cut a piece of toast. I guess there really is nothing in the world that people will ever 100 percent agree upon.

It all began innocuously enough with a tweet by the Sheffield Hallam University food service staff in England asking which way people would prefer to have their toast sliced. They even provided three different choices.

Which way would you prefer our staff to do you toast at the end of a night?! pic.twitter.com/QKLUb5uX5x

Frankly, I could live with toast choice number one or three, probably with choice one being my top selection. Choice number two just seems weird to me, but it certainly wouldn’t stop me from eating it.

Apparently, based on my preferences, I am some kind of monster.

Never in my life seen toast cut like 3, outrageous https://t.co/IEyPjSF8dK

If you cut your toast long ways throw your whole life in the bin you creature https://t.co/HbaBkvtxrD

If you cut your toast like Number 3 then please never eat toast again.#NoToToastNumber3 https://t.co/tnarLcy7k1

I mean – imagine you met the love of your life and then you found out that they cut their toast like #ToastNumber3!
You'd have to really examine your conscience with that one! #NoToToastNumber3

Number 3 makes me so anxious.

This thread is hilarious! If you cut like #3 you must be a sociopath. 😂😂😂 https://t.co/rezOBjwrH6

Oh sweet Jesus I didn’t even know people contemplated 3. If there was ever a wrong way to enjoy toast, that is it.

Wow. Who knew toast was such a serious issue?

Luckily, I am not alone though.

Raised on 3, discovered 1 in my youth and have dabbled with 2 but really don’t want to make it a habit https://t.co/ROI9MdrDcl

Oh my goodness, how is this even up for debate? #1 is clearly the only way to cut toast – and #2, that's just vile – I'm sure it's one of the signs of the apocalypse.

Am I the only one who has NEVER cut my bread like #2 too wtf kinda shit is that https://t.co/7rQBaGhARf

1 is the only acceptable way

I still think if you cut your toast in triangles you get more toast 😂🤷🏻‍♀️ https://t.co/IiLYpm6wpV

Makes sense to me!

All I know is that if the repeal of net neutrality makes it harder for me to be entertained by mindless arguments about things like how to properly slice a piece of toast then I am gonna have to smack somebody.