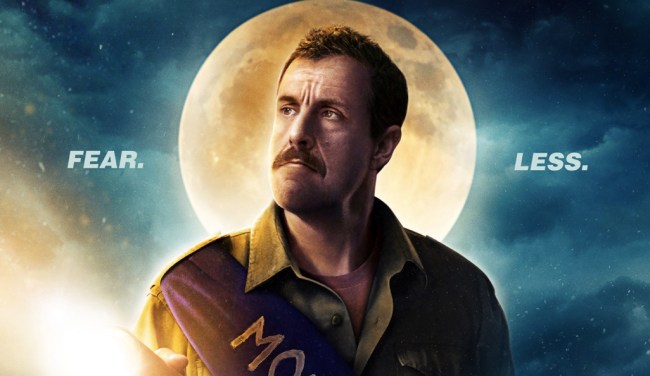 Gonna be completely honest with you here: I’m actually really looking forward to checking out Hubie Halloween, Adam Sandler’s latest Netflix masterpiece, despite the fact that I’ve yet to watch any of the previous entries into Sandler’s Netflix canon (in addition to Hubie Halloween and his stand-up special 100% Fresh, Sandler has starred in four other comedies for the streamer: The Do-Over, Sandy Wexler, The Week Of, and Murder Mystery.

Maybe it’s because the movie industry has been absolutely gutted this year and will likely never return to being the way we once knew it. Maybe because it’s ~~~Spooky Season~~~ and the Fall weather is absolutely primo I’m in such a Halloween mood that I’m looking to consume as much of it as I can short of intravenously ingesting liquid candy corn and pumpkin spice lattes. Or, most likely, it’s because everything basically sucks right now and I could just use a good ole fashioned laugh at a “so bad it’s good” movie.

And no one — I mean no one — has mastered the art of “so bad it’s good” more than our boy The Sandman, who literally promised to make “the worst movies ever” after being snubbed for an Academy Award nomination for Uncut Gems.

And if you’re curious, here’s the film’s official synopsis since the trailer does, quite literally, absolutely nothing to explain what the movie’s actually about.

Hubie Dubois (Adam Sandler) thanklessly spends every Halloween making sure the residents of his hometown, Salem, celebrate safely and play by the rules. But this year, an escaped criminal and a mysterious new neighbor have Hubie on high alert. When people start disappearing, it’s up to Hubie to convince the police (Kevin James, Kenan Thompson) and townsfolk that the monsters are real, and only he can stop them.

The brave among us stayed up late or woke up early to check out Hubie Halloween and the reactions are exactly what you’d expect, and that is (in all likelihood) funnier than the movie itself.

"You could trouble me for a warm glass of shut the hell up!"

Adam Sandler's 'Hubie Halloween' is now on Netflix and Ben Stiller pops up as a familiar face: the evil orderly in 'Happy Gilmore' 😂 pic.twitter.com/WWqHg4pqBA

Watching Hubie Halloween and it looks like Ben stiller has reprised an old role of his. pic.twitter.com/vhooYIWzHr

Happy Hubie Halloween to all who worship! pic.twitter.com/52r5G2Yni5

watching Hubie Halloween because i hate myself pic.twitter.com/fRD0LiF6TY

As is tradition (because when The Sandman gets paid, the SQUAD gets paid, and that’s why he’s the man), Hubie Halloween stars the regular gang of Sandler pals such as Kevin James, Julie Bowen, Maya Rudolph, Rob Schneider, Steve Buscemi, Shaquille O’Neal (!), Tim Meadows, and Colin Quinn.