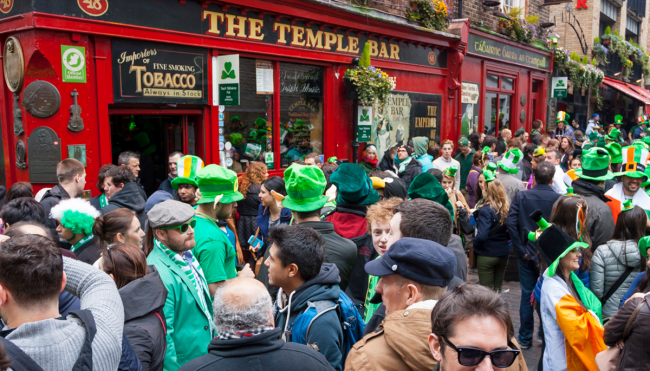 I’m not one of those Americans who insist on calling myself “Irish” because my great-great-grandfather made his way through Ellis Island in the 1800s, but I can safely say my sense of humor falls firmly in line with the brand of comedy the Emerald Isle is known for.

There might not be any academic papers examining the roots of the humor that defines Ireland, but I recently came across a pretty intriguing theory that was penned by a fan of the truly delightful Derry Girls who said they grew up in the titular city at the height of The Troubles. They posited the Irish turn to comedy to cope with the many issues people in the country have been forced to deal with thanks in no small part to centuries of British imperialism (as well as a sizeable dash of Catholic guilt), an idea that others in a better position to discuss the topic than myself have echoed.

Regardless of the true reason, anyone who’s had the pleasure of visiting Ireland or hanging out with some of the country’s natives likely knows they’re masters of improv with an impressive ability to come up with some fantastic jokes on the spot. If you need proof they’re just built differently, I would direct you to a phenomenal Twitter thread filled to the brim with some amazing anecdotes concerning the Irish roasting some unfortunate souls over their outfits.

Over the weekend, a Twitter user kicked things off by recalling the time they decided to wear a red beret in the city of Waterford only to be dubbed “Super Mario” by a passerby.

That inspired plenty of others to share similar experiences, and if you’re looking for a laugh today, you’ve come to the right place.

Lad wore a vest to a nightclub in Bundoran about twenty years ago. Still called vesty.

I wore a suit with a matching tie and pocket square to my first day of work at an advertising company (I thought I was going to be in Mad Men I guess) and the staff sent around and signed a communion card for me with a fiver in it.

Walking up the main street of Letterkenny wearing a hat. A slightly inebriated stranger walking towards me. I can sense his growing distress at my general being so I body swerve his attempt to stop & chat. Hear him shout in exasperation from behind “Stop wearing fuckin hats”.

I once wore a silver jacket to college, turned up late for class, said ‘sorry I’m late’, lecturer said, ‘that’s ok’ then waited til I was halfway across the front of the full class before following up with ‘trouble with the spaceship again was it?’.

My brother-in-law rocked up to his football club in Highlands of Scotland wearing his new bright yellow puffa. He opened the door, proud as punch in his new jacket, and immediately heard “Fckng hell, which one are you, Tinky Winky or La La?” 🤣🤣🤣

I once ordered a taxi in Belfast for a night out. The driver pulls up to my house and just says “yer not going out like that. Go back in and change, I’ll turn off the metre.” I swear I was wearing normal jeans and a normal jacket.

a brick layer I used to work with walked by a sales rep wearing pointy shoes and he asked him “what the fuck are those for, kicking the eyes out of spiders?”

Wearing a suit on my way to a job interview, I was stopped and asked what charges I was up on. Also played football with a lad who was called Moses by all his friends cos he wore sandals once when he was 9. Another was called Barney for years after he wore a purple jumper.

Camouflage t-shirt once,
“Oooooh it’s a floating head” was the response in the pub.