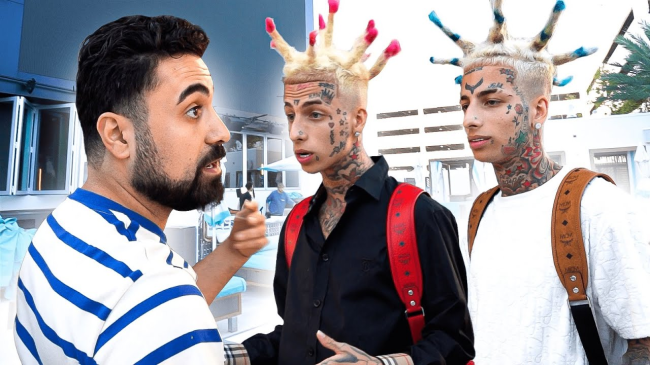 First of all, apologies right up front for possibly putting the song “Island Boy” into your head today. If you somehow have been spared hearing it, then I warn you not to go searching for it. (It’s here. It’s right here. Sorry, not sorry.)

For those unfamiliar, two twins from West Palm Beach named Franky and Alex Venegas, who go by the rap names Kodiyakredd and Flyysoulja, blew up on TikTok earlier this year for their unusual looks and their off-key, off-beat rap and singing skills.

The twins have been described as “if gas station boner pills were a person.”

So, naturally, with those impressive credits, the Island Boys were destined to collaborate at some point with YouTube star slash boxing wannabe Logan Paul. Which they did this week with an appearance on Paul’s podcast Impaulsive.

Unfortunately (or fortunately, depending on your point of view), things didn’t go very smoothly when Flyysoulja and Kodiyakredd met one of the show’s hosts George Jankos.

Apparently, the Island Boys were not very appreciative of Jankos trying to give them some professional advice when he suggested they could always live on their expensive jewelry collection if their musical careers ended up not panning out.

Related: Person Quits Their Job By Hiring The Island Boys To Film An Amazing Company-Wide Cameo

“Boys, what if it doesn’t work out and now you just got this hair and these face tats,” Logan Paul began the discussion.

After one of the explains how people have always doubted him (he’s 20-years-old), being from the ghettos of Palm Beach (Palm Beach has ghettos?), Jankos chimed in with his advice.

“I think if, God forbid, it doesn’t go in your guys’ direction, for real, I think you guys take all of your jewelry assets and invest into something so you guys will never ever be broke again.”

“I don’t need financial advice when I probably make more money than you,” one of the twins replied. “Why don’t you go talk to somebody else about that?”

“That was me being nice. It wasn’t me being, like, an a—hole. I could be an a–hole. I could turn it up and be an a—hole,” Jankos fired back.

“Be an a–hole. It’s not gonna go in your favor,” one of the twins shot back.

“It could go in my favor,” Jankos replied.

“You really don’t want to go there,” one of the twins answered back. (Have you figured out that I have no idea which one of them is which yet?)

“I was giving you guys nice advice and you guys were being a—holes,” said Jankos.

“Hey, George, keep talking and we’ll walk out,” the other twin interjected.

After more tough talk, Jankos told the twins, “This is not the Nelk boys. We don’t do fake over here.”

After getting up and beginning to walk out, Jankos asks them, “What did I say that offended you guys?”

After more bickering, one of the twins informed Jankos, “You know me from Island Boys, but you know I’m thugging, bro, right? You know that, right?”

Jankos, in the end, was, like most people who watch the Island Boys, was left dumbfounded by the whole ordeal.

Here’s the argument from a different perspective…

I think we all know how this feud has to end, don’t we? George Jankos is going to have be on the undercard of a Logan Paul fight boxing one of the Island Boys.