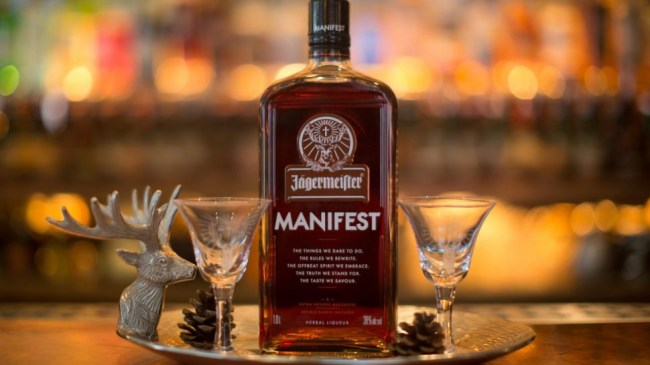 As I grow older and am forced to attend to previously foreign concepts like “saving” and “drinking responsibly” and “not peeing the bed,” I have needed to distance myself from my old friend Jägermeister. Last I heard, Jäger was still working the bars, befriending young bros with lacrosse pinnies and croakies, and living his best life despite O’Doul’s begging him to slow down and get a 9-5 office gig. O’Doul’s was always too weak and conformist to be who he really wanted.

I haven’t visited Jäger in a year or so, not that I don’t want to, it’s just that I know when we get together, I end up curled up in the fetal position next to my toilet after texting my ex from sixth grade asking where we went wrong.

But recently, O’Doul’s gave me a call and told me Jägermeister has cleaned himself up, evolved a bit. He now goes by Jägermeister Manifest.

Manifest is the first super premium spirit from the herbal liquor brand, which was introduced over 80 years ago.

Here are the deets, via Thrillist:

The new version is specially crafted by adding even more botanicals to the classic recipe, which already features a blend of 56 natural ingredients that give the dark brown booze its spicy flavor. However, rather than evoke the same intensity of the original, the addition of new herbs, blossoms, roots, and fruits hits a bit softer thanks to a longer maturation process of 12-plus months in small and large oak casks. Much like other premium herbal liqueurs, Manifest is meant to be served neat, and enjoyed as an aperitif or digestif.

The aging process has prohibited an excess of Manifest bottles from getting released at the moment, but select retailers should have it for about $60 a bottle.

Original Jäger, don’t cry because its over, smile because it happened.