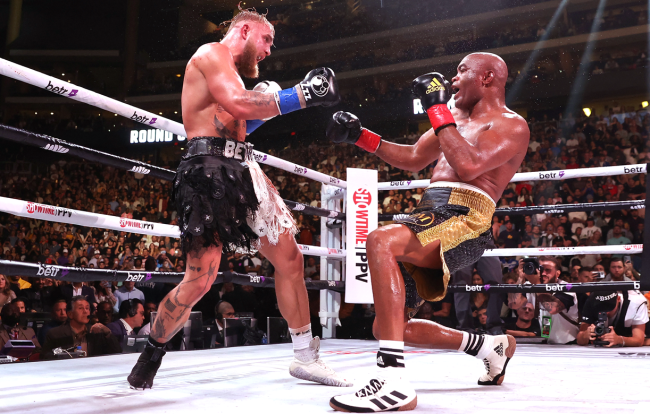 His latest boxing victory came at the expense of 47 year-old Anderson Silva. Prior to his boxing match with Paul, Silva had one win in his last nine MMA fights. His last MMA win came in 2017. Prior to that you have to go back to 2012 to find a Silva victory.

On the plus side (?), Silva was 2-2 as a boxer prior to the Paul fight having defeated Tito Ortiz (another retired MMA star) and Julio Cesar Chavez Jr., who actually held the WBC middleweight title… in 2011 and 2012.

However, even with all those tomato cans Jake Paul has fought, many, like they did when his brother Logan fought Floyd Mayweather, are claiming the Silva fight was rigged.

“It’s still pretty crazy to me, beating one of the greatest combat strikers of all time,” Paul told The MMA Hour. “I’m just proud of myself. I’m proud I was able to execute everything we worked on in the gym. This is the first fight where everything was slowed down for me, and I was able to really, really handle the moment really well and execute the game plan perfectly. I felt really comfortable in there, and here we are. It’s unbelievable, it’s surreal. I can’t believe I actually pulled it off, but I’m very proud of myself.”

As the fight was progressing and in the hours afterwards, many boxing fans on Twitter were going nuts with claims of a fix.

The fight was rigged, Jake Paul doesn’t even land 🤣 pic.twitter.com/M9BOk4xYkt

Jake Paul heard all those naysayers and fired back with a very ironic statement.

“I think smart people with intelligence are giving me props and respect,” Paul said. “Like the WBC President saying that anyone who says Jake is not a real boxer is just bitter and is a hater. People like Teddy Atlas showing me mad respect, a lot of fighters showing me mad respect, a lot of MMA guys texting me saying, ‘You look really sharp, that was the best you’ve fought,’ Ryan Garcia showing me respect. So the smart people who I care about are showing that love. There are the people who will always be there in my career who are discrediting it. Now, they’re saying it was rigged. It went from, ‘Jake’s going to get knocked out by Anderson,’ to, ‘Oh, that was rigged.’”

“It just sucks. It sucks because I worked so hard for this,” Paul continued. “I dedicate everything, sacrifice everything, every single day, bust my balls, have a 15-person team working around the clock to help me become the best boxer possible, and when I do something like beating Anderson Silva, they try to take it away from me. But I know deep down, and I guess that’s all that really matters.”

As for fighting nothing but non-boxers, Paul said, “anyone that is smart knows that Anderson Silva is a real professional boxer.”