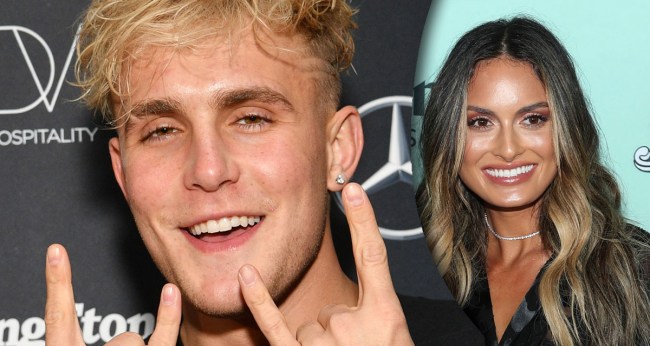 Remember how around six months ago YouTube personality Jake Paul got married to his girlfriend, fellow YouTuber Tana Mongeau? Then only a week later the couple admitted that the entire wedding was a publicity stunt and the two of them were never actually exclusive?

Now, however, Jake is totally, for real, dating someone else you may have heard of (or at least seen), World Series flasher Julia Rose. (What, Lenny Dykstra isn’t good enough for her? Pffft… lame.)

In case you somehow don’t remember, Rose became internet famous for, along with a couple of her friends, flashing their boobs behind home plate, on camera, at Astros pitcher Gerrit Cole during the 2019 World Series.

Page Six says it has “exclusively learned” that “Paul, 23, and Rose were spotted together in Miami for his boxing match against British YouTuber AnEsonGib.”

For the record, Jake was victorious over AnEsonGib with a first round knockout. But you probably already knew that, right?

According to a source, Rose supported her new boyfriend all week ahead of the competition and at events, and the new couple even hung out and partied with Paul’s ex Mongeau. In true prankster fashion, at the afterparty Rose and Mongeau staged a fight, which ended with a passionate kiss, as a joke on Paul. Rose later posted an overly friendly photo with Mongeau on Instagram.

Mongeau and Paul are “in a great place as friends and she is supportive of Jake’s new relationship,” the source told us.

This isn’t the first time Paul and Rose have been linked. She also appear in Paul’s music video for the song “These Days.” (That’s her in bed with Jake.)

In other Paul-related news that could only happen in 2020, trouble wide receiver Antonio Brown and Jake’s brother Logan are still feuding and talking about fighting each other.