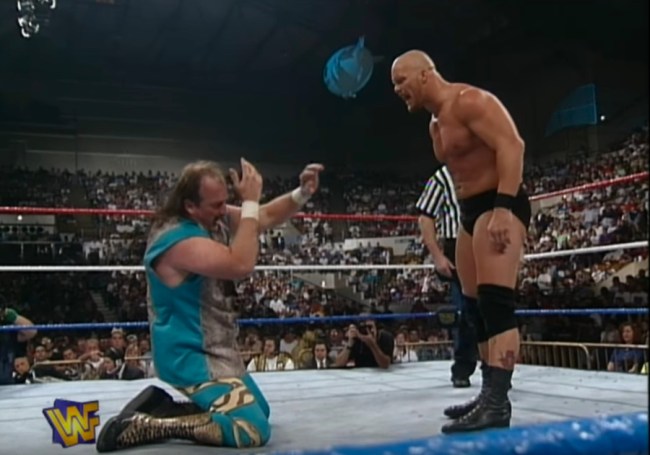 Sometimes in professional wrestling, legends spot greatness in other performers, even when the owner of the company isn’t convinced of that person’s potential.

Jake “The Snake” Roberts saw the potential in “Stone Cold” Steve Austin when he joined the WWE after stops in WCW and ECW.

In a recent interview with Premier Live TV, Roberts discussed Austin in his early days with the company.

“When Steve Austin first came to the WWF, he was the Ringmaster. That strikes fear in everyone. And you have someone else talking for you. Are you freaking kidding me?” Roberts laughs, discussing Austin’s original gimmick with the company.

Austin debuted in 1996 as “The Ringmaster” and was given the Million Dollar Belt by his manager, Ted Dibiase.

Roberts explains that Austin was frustrated with his position and looked to Jake for guidance.

“When Steve Austin came, I was helping write television. And I watched him and said ‘This motherf-cker has got it, he’s got that ‘it’ factor and he doesn’t even know he’s got it.’ He didn’t.

He wanted to get better, and he was listening. Every night he was on the road, he would call me and tell me what happened in his match and how he dealt with it and how he brought it to the end and what result it had.

After a while, Roberts began to work Austin into certain angles and stories. Eventually, Jake told Vince McMahon that Austin was going to be a star someday. The WWE chairman dismissed the idea.

“One day I told Vince ‘That guy right there is gonna be your next super, super star.’

He says ‘Are you kidding me, Jake?’ He said that guy will never make it past the fifth or sixth match, he’s not a main eventer.

I said the fuck he ain’t. He said do you think so, and I said yeah I think so.

We tried the thing, and I guess it might have worked, huh?”

“The thing” Roberts is referring to in the interview is Austin beating Roberts in the finals of “The King of the Ring” tournament and cutting the Austin 3:16 promo after the match.

History shows that worked out pretty well for Austin.